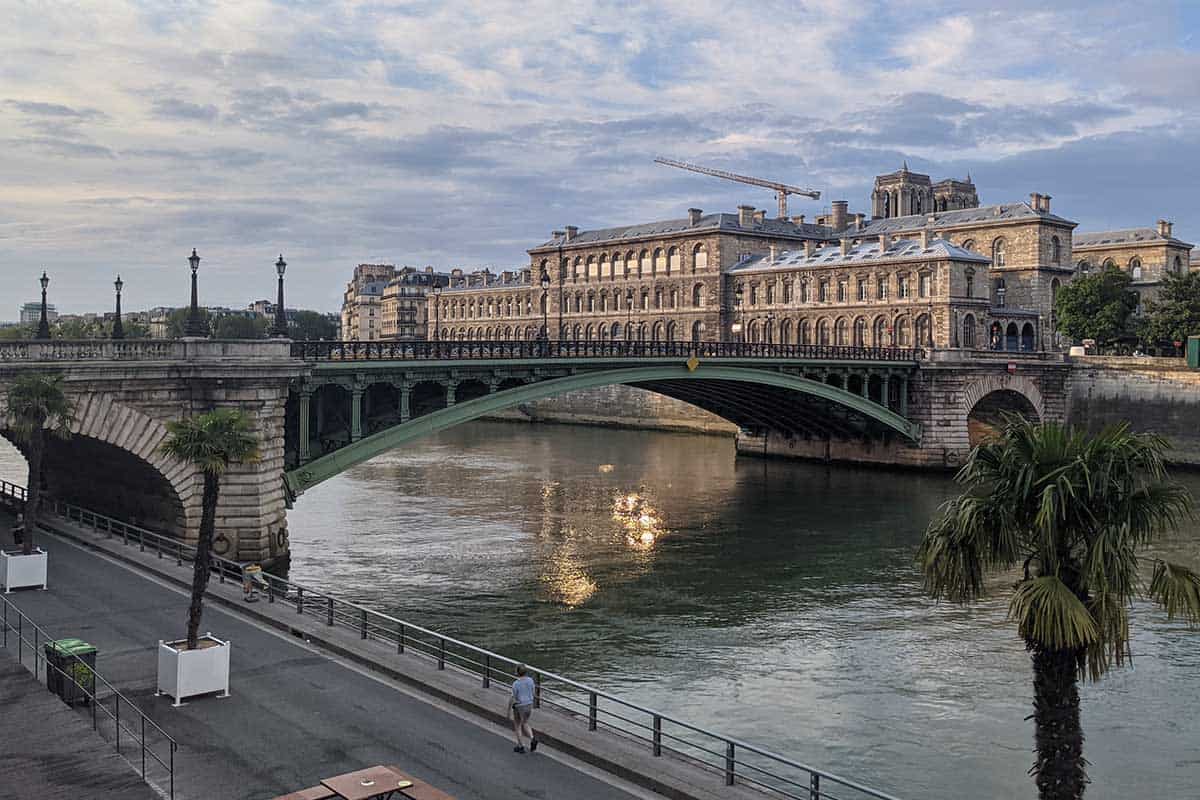 Paris is a city of immense beauty, but also immense, if occasional, complication. These are my best Paris travel hacks for navigating the city.

1. I feel safe here, but property crime is real.

Within the city limits, I’ve never felt unsafe in Paris — not even walking home solo at 2 a.m. I don’t know anyone who’s been the victim of a violent crime. I feel physically safer in Paris than in the other big cities where I’ve lived — New York, San Francisco, London, and Rio — and I’ve never walked into a mall here looking for the exits in case some lunatic starts shooting up the food court.

That said — that said! — property crime here is real. Pickpocketing is real. I feel like relative to NY and SF, you’re less likely to get your bag back if you leave it in a restaurant. And — pièce de résistance — earlier this summer a thief came through a window into my apartment and swiped my laptop.

Bizarrely, parallel-ly, I feel like the French themselves are generally very honest — I often buy things online and literally send cash by mail.

Just keep an eye on your stuff, and you’ll be fine.

2. The best way into the city from CDG is the RER; the best way from Orly is by Uber.

In terms of my transportation-centric Paris travel hacks: Obviously this all goes out the window if you have a ton of bags. The RER B from Charles de Gaulle is quick, efficient, cheap, and it picks you up in-terminal (unlike Orly, where you need to take Orlyval first). It can probably get you close to where you’re staying, as it stops at the Gare du Nord, Châtelet, St-Michel, etc. If you’re a train nerd, you can wait for a train running express to the Gare du Nord – it’s under 30 minutes direct, 10 minutes longer otherwise.

You can take public transport from Orly — by OrlyBus (which goes to Place Denfert-Rochereau, of limited value to most people), by T7 tram to Metro line 7 (extremely tedious), or by Orlyval tram to Antony, where you can switch the RER B heading north — a pain if you have a bunch of bags). Ubers from Orly can be as cheap as €25, while they’ll probably be several times that from CDG, making the RER a better choice from CDG but not from Orly.

3. If you’re looking for cheap airfares to other destinations from Paris, don’t sleep on Beauvais.

This is a ridiculously small, terrible airport about 60 miles north of Paris that’s nonetheless home to a number of budget airlines, including EasyJet, Ryanair, and Wizzair. It’s a hassle to get to, but I flew to Sofia and Sarajevo from here for under $30.

Paris is bookended by two giant parks — the Bois de Boulogne and the Bois de Vincennes. Controversial opinion but I don’t find either of them very fun. The Bois de Boulogne is worth a trip only for the Fondation Louis Vuitton (a beautiful art museum with worthy exhibitions). Instead of the Bois de Vincennes, I’d swap in the Chateau de Vincennes, which is an amazing castle right outside of Paris (it’s so close you can get there by Metro line 1). If you’re looking for nature, I’d suggest a closer-in park like the Parc des Buttes-Chaumont or just hanging out on the banks of the Seine.

5. The Mona Lisa is the worst part of the Louvre.

Want to stand around with an overheated roomful of strangers staring at a painting through their cellphone? Welcome to the Mona Lisa. No shade to the Mona Lisa, but it’s just not worth the hassle in a gigantic museum full of amazing work. Three other spots to consider: For a year I began every visit in Cour Visconti, home to the Islamic art collection. I’m obsessed with Cour Marly, home to part of the sculpture collection. And my favorite painting at the Louvre, Delacroix’s Jeune orpheline au cimetière is hidden up in an attic/very quiet corner of the museum.

6. If someone’s asking you to sign a petition, it’s a scam.

Here’s how it works.

7. The Metro is better than Uber.

The Metro can get you pretty much everywhere (except to the dead center of the Marais, thanks to the fact that the neighborhood was, indeed, a swamp (“marais” is “swamp” in French). It runs from 5:30 a.m. until 12:40 a.m., an hour later on Fridays and Saturdays. Google Maps can give you metro directions with its public transportation option — or download the RATP app (now officially known as Bonjour RATP), which can do the same thing but in French or English and with extra granularity.

Depending on where I am, I’ll open the conversation in English. (And certainly, if I’m asked a question by an overbearing shop worker, I’ll definitely answer in English.) The level of English spoken by service workers in Paris is very high — notably higher than even a few years ago — no doubt aided by the spread of English via the Internet. The fumbling of “parlez-vous anglais” seems to be a relic of an older generation. If we’re framing it as a question of respect, I actually think it’s more respectful to assume that they speak better English than I do French.

Most of the time, I’ll ask my question in French, and then, if the employee responds in English, certainly stay in English. At certain places, I might start off in English — a major department store or museum. And in other places — catering to Parisians — I’ll start and stay in French: not only the tax and immigration offices but places like a hardware store, the post office, and the grocery store.

All that said, I absolutely do the whole “Bonjour/bonsoir” to the shopkeeper on entering, and “Bonne journée/bonne soirée” on leaving.

9. Trying on clothes here can be miserable.

I hate shopping for clothes in Paris. The clothes: beautiful! The service: actually, often, overbearing. Far from the stereotype of the lazy French worker (a stereotype I don’t find accurate), I find shop staff here way too invested in what I’m doing. I just want to try on some clothes, buy them/or not, and leave.

Many Paris dressing rooms don’t have mirrors (what?) and do have cloth “doors” — meaning that it’s hard to get any privacy. I wouldn’t mind emerging from the dressing room to take a look in a communal mirror if not for the absolutely too frank appraisals of the staff: I know if it’s too tight, I don’t need a second opinion sheesh!!! The last time I tried on a dress at BHV, the concession employee was knocking on the dressing room door, sizing me up, bringing over matching shoes I didn’t ask for. Honestly, in many ways she was a huge help (the shoes were great!) but I just wanted to be left alone. I am likely in the minority on this, but it’s something to know.

For the record, plenty of places, like Sézane, have mirrors in its dressing rooms, with chill staff.

10. Why not consider the off season??

I actually sort of love crowds, but many people don’t — and to those people I would say: Have you considered visiting in January, February, or November? Paris is packed during the summer (see more in #11) and visiting in the off-season can mean fewer crowds and not-bad weather. These days, with 100-degree-plus heat waves and a stubborn lack of air conditioning, anyone compromised by the heat shouldn’t bet on temperate weather in July or August (or should absolutely be sure to find a hotel/Airbnb with AC). January and February can be surprisingly mild (though often rainy), and late in the month, November offers holiday decorations without the Christmas crowds.

At one point last August, there was only one other apartment on my street with the lights on — a bizarre but delightful situation. I love the chilled vibe as the entire city empties out. (Fact: The dominant language in my Franprix, at least during August, is English!) If you’re looking for the most authentic French experience — well, I’d say there’s nothing more authentic than millions of French people taking off for their summer houses.

God help us. I grew up in standard American mode, eating dinner at 5:30 every night. Let me emphasize, I don’t think eating later is more sophisticated — we ate early because my mom grew up eating early, and her family ate early because my grandpa was a farmer who got up with the sun. So no shame — but get ready to eat at 8 p.m. or so (and don’t expect restaurants to open for dinner until 7/7:30).

A corollary of this is that outside of fast food and boulangeries, it can be hard to find lunch after 2 p.m. As a previous New Yorker who ate lunch at her desk at 3 p.m. (earliest!!) every day, this has caused me absolutely no end of heartbreak//empty stomach syndrome. Even after nine years, I’ll still be wandering the streets at 2:45, angry at myself for missing the cut-off. Best solution: crêpes at Breizh, my top choice crêpe place, which is always busy but helpfully serves crêpes and galettes all day long.