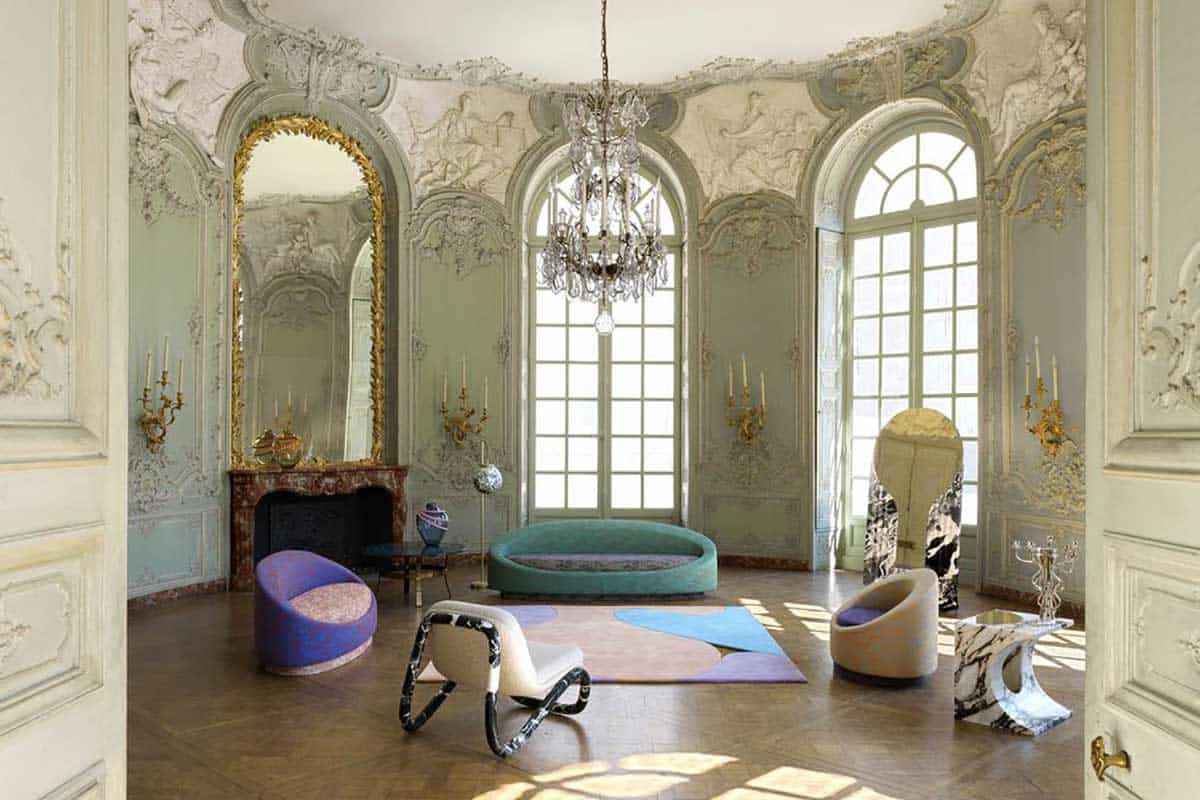 These are the 21 most beautiful Paris apartment interiors on Instagram — which, all things being equal, is a pretty good place to look for them. Note: These get increasingly more fantastical as we go on, so while we start with this lovely, regular-person space — with the nice cat sleeping on the nice rattan chair — we definitely do conclude with, for example, the Hotel de Soubise (the construction of which was partially funded by an affair with Louis XIV) and additional castle-like spaces.

The good thing about Paris apartments that not everyone knows is that (thank you, Communist Party) rents are kept down pretty assiduously by law — so while Paris rents are expensive by French standards, they are a fraction of what they’d be in, say, San Francisco or London. Dream big! 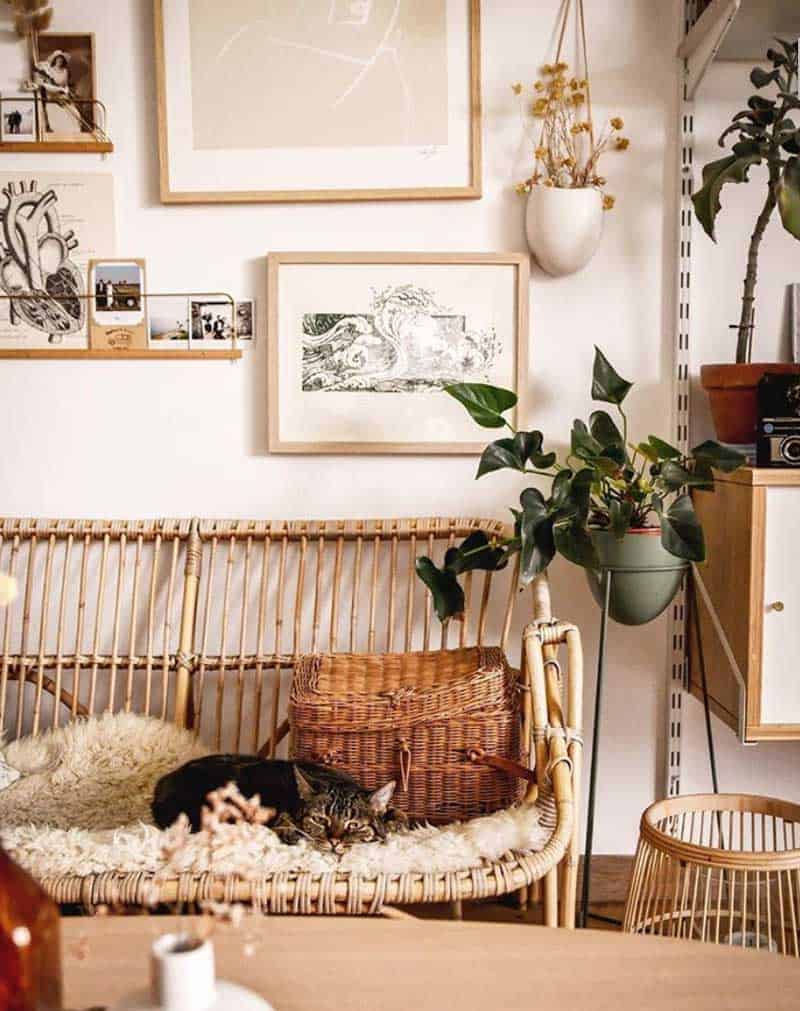 Best Cozy Corner in History (@m.art.ion)
Can you even? Those plants, that cat, all that rattan? 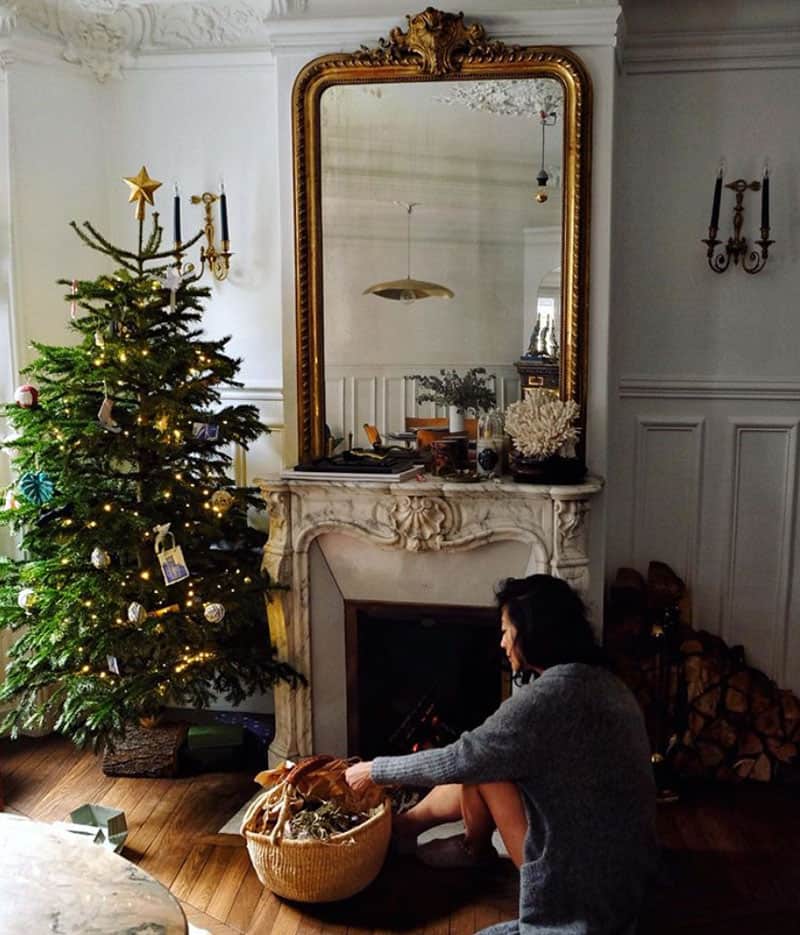 Best Giant Gilded Mirror in the Service of Holiday Cheer (@jackiekaiellis)
Fact: A gilded mirror is worth having all year round, but possibly especially right next to a Christmas tree. 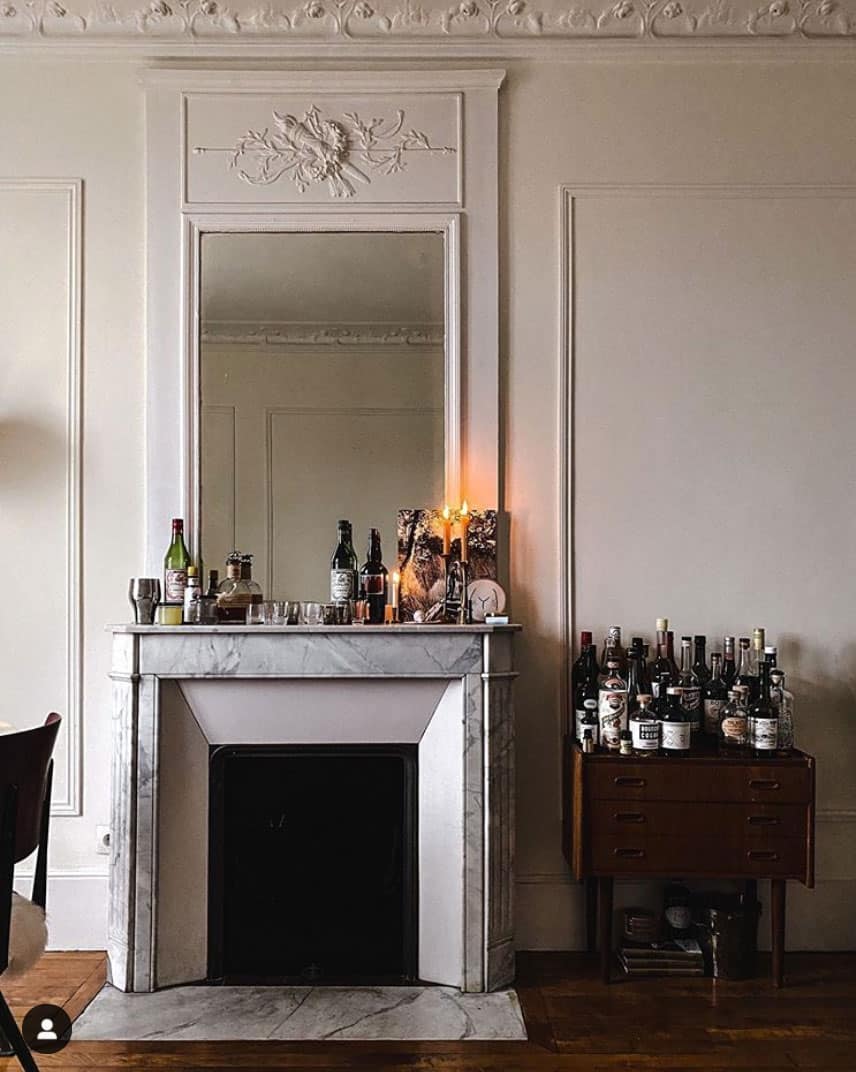 Best Extremely Well Set Up Bar System
Confinement is definitely not a problem when you have everything you need without going downstairs. 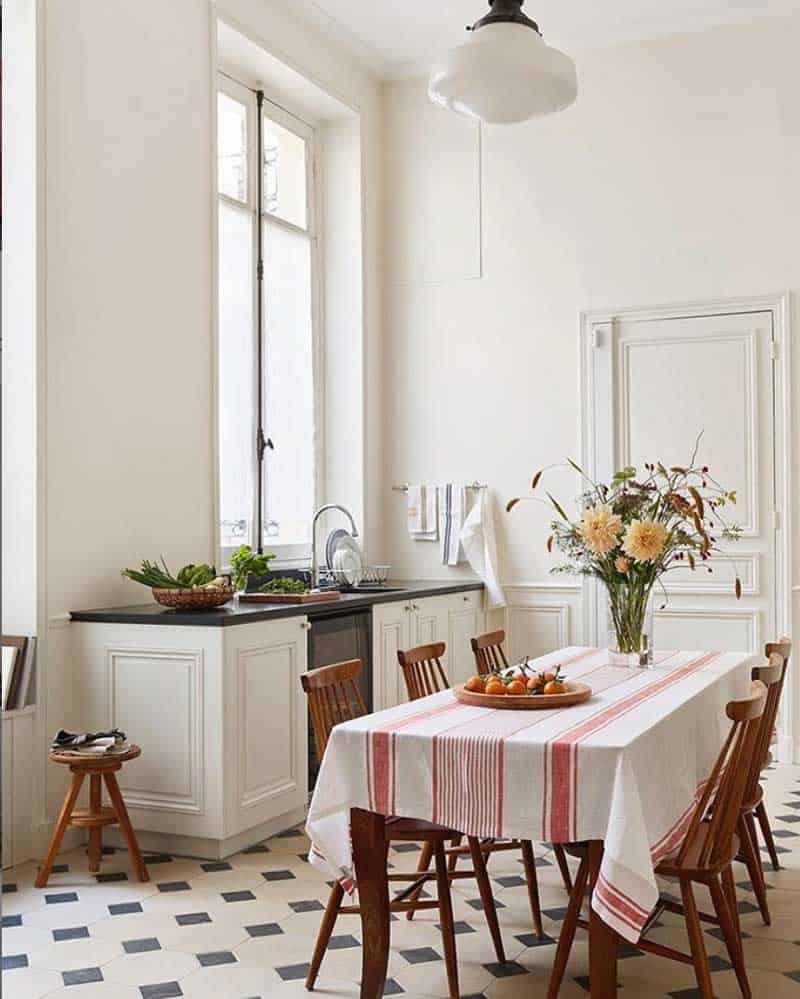 Best Classic, and Utterly Humungous, Kitchen (@abkasha)
So this is what a kitchen looks like without cabinets! 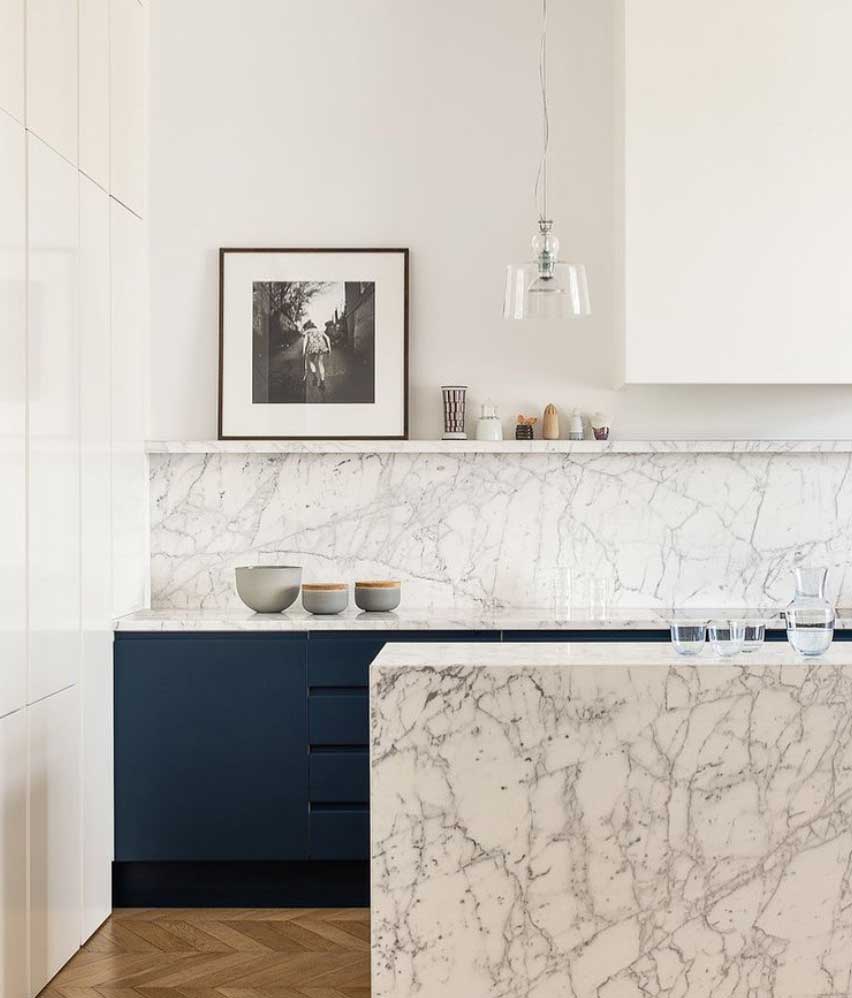 Best Kitchen With an Utterly Kanye-Level Amount of Marble (@stephenjulliard)
Here’s a look at another extremely marble-centric Paris kitchen, also designed by Studio Charlotte Macaux Perelman. What I love most is the comment that reads “So restrained!” and it’s like, Yes??? But also — definitely not?? 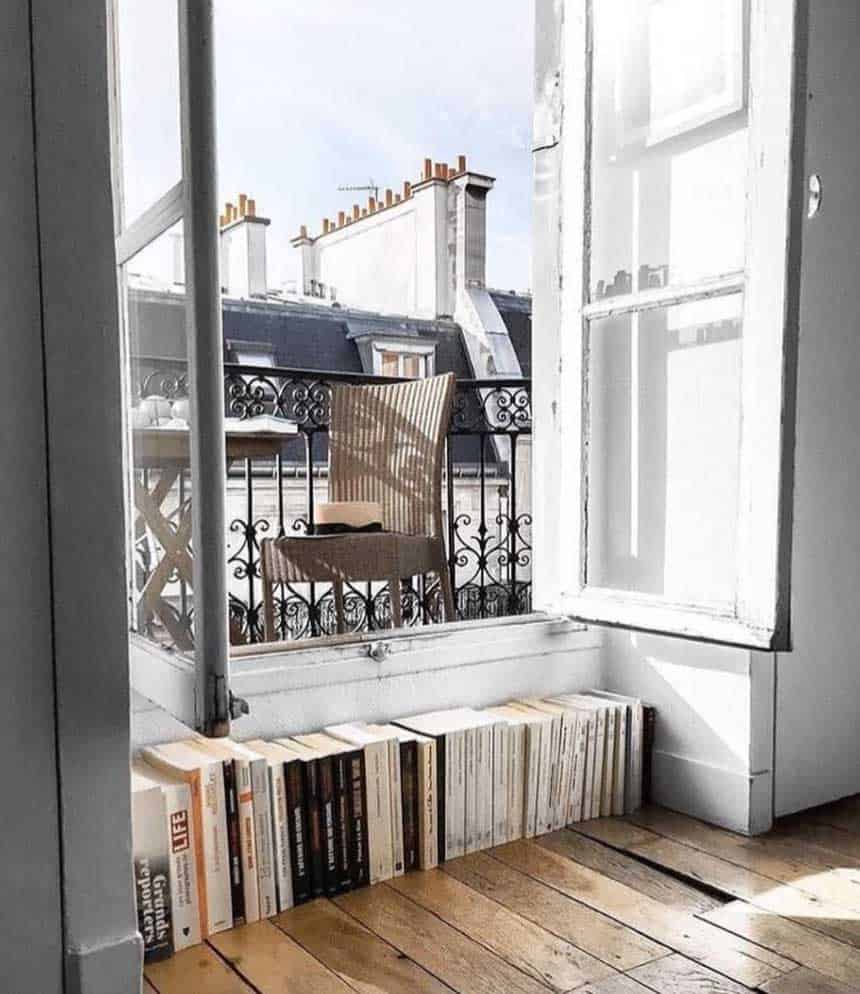 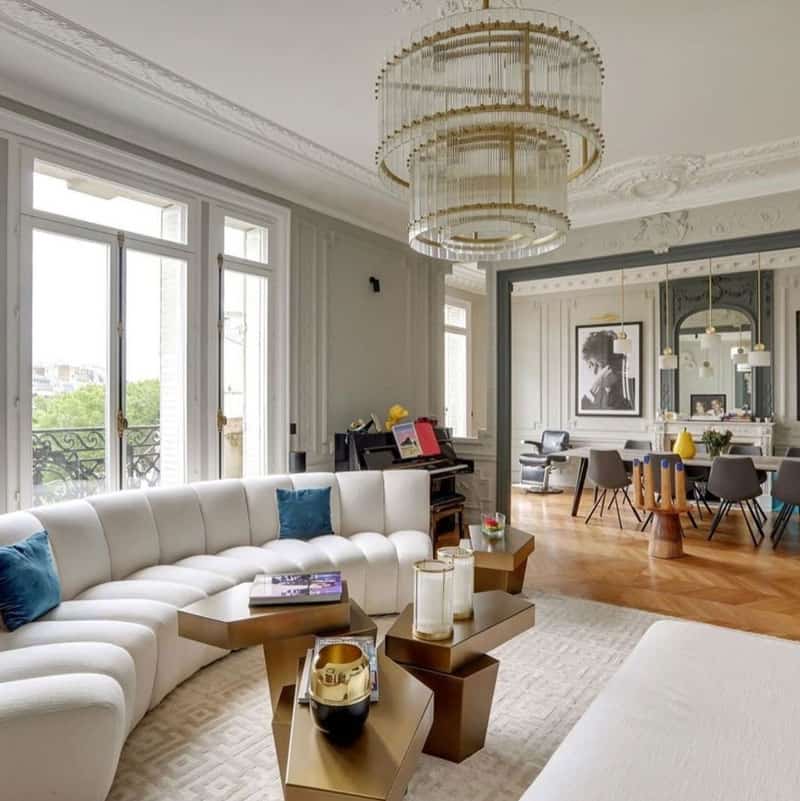 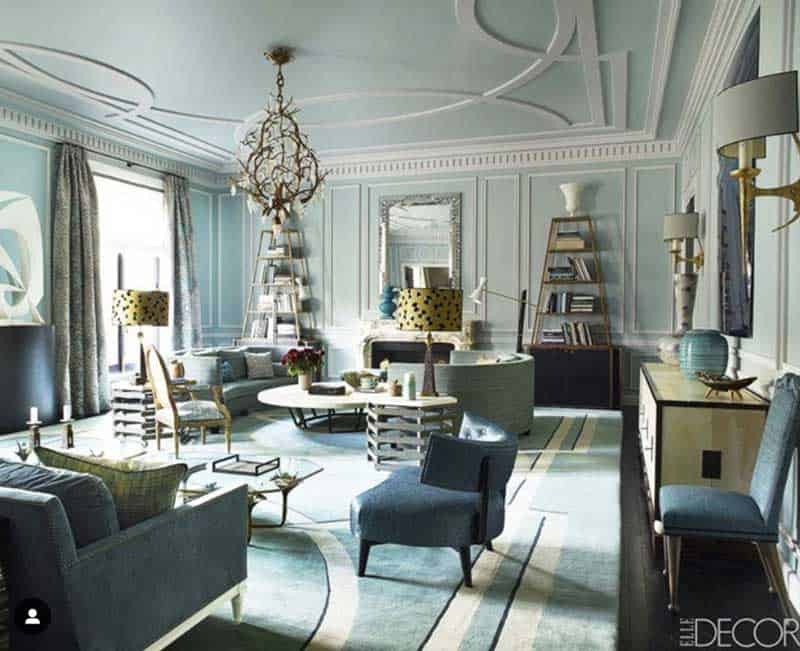 Best Totally Unnecessary Ceiling Ornamention (@suzannetuckerhome)
This is basically the opposite of a cozy cat corner (obvs), but if you’re going all in, might as well get some exquisite, calligraphic details on the ceilings. 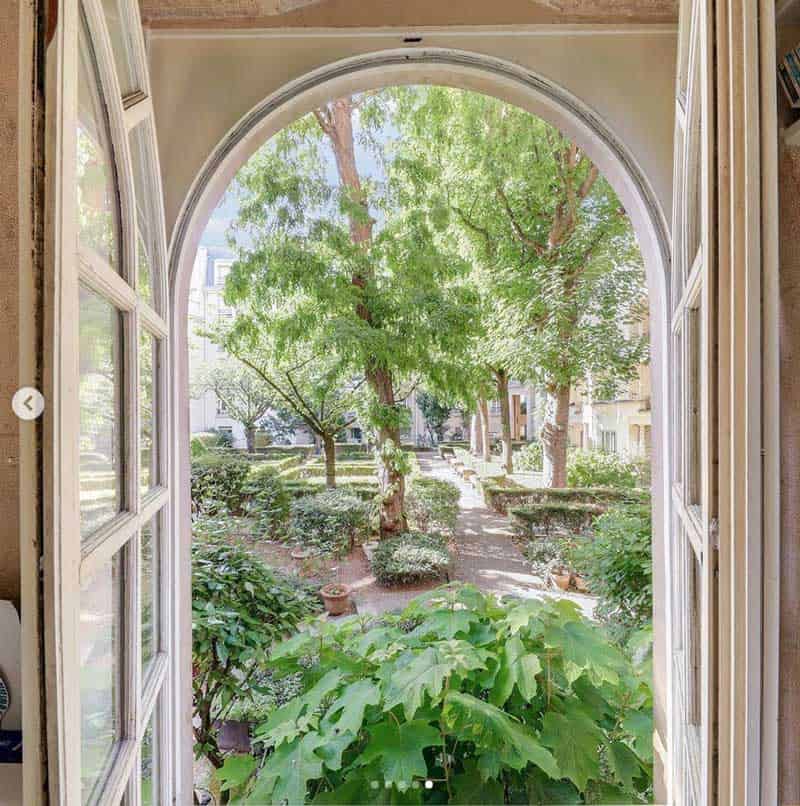 Most Completely Excessive Garden Right in the Middle of the Fifth (@proprietesparisiennessir)
All the best Paris apartments are tucked away behind walls, which is why the for-sale listings are so permanently revelatory. 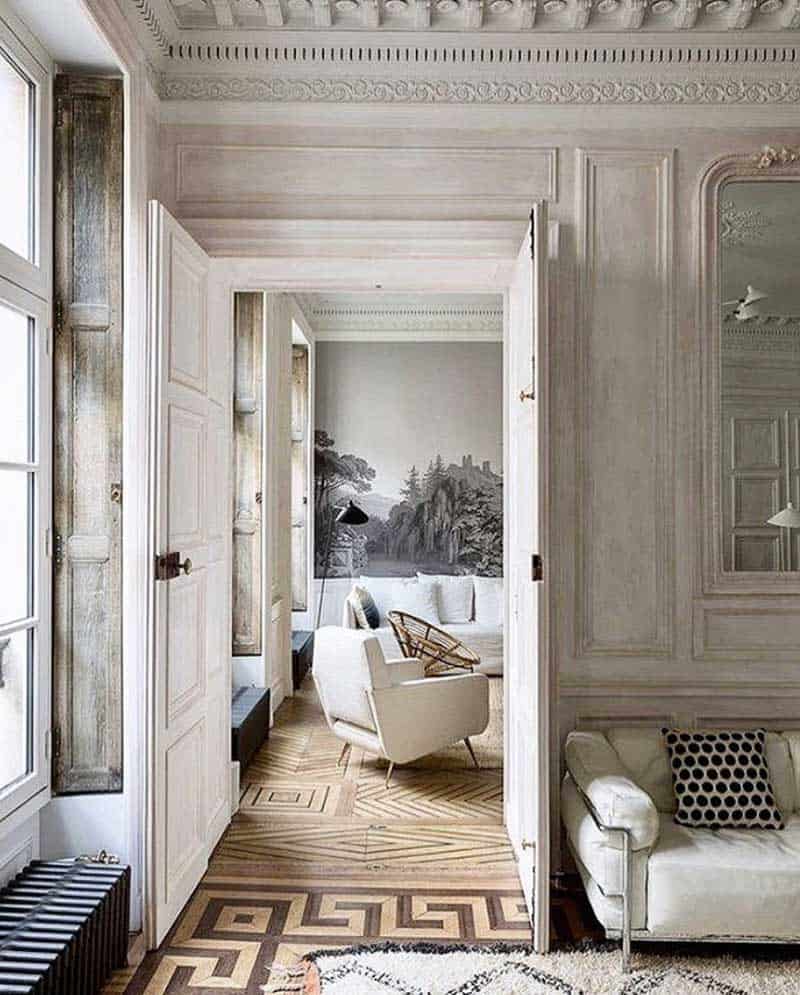 Best Floors That I Would Just Sit Around and Stare at All Day
They might look a little extra IRL, but from a distance I love the extremely wild approach to parquet flooring. Also note that wonderful, circular rattan chair in the background. 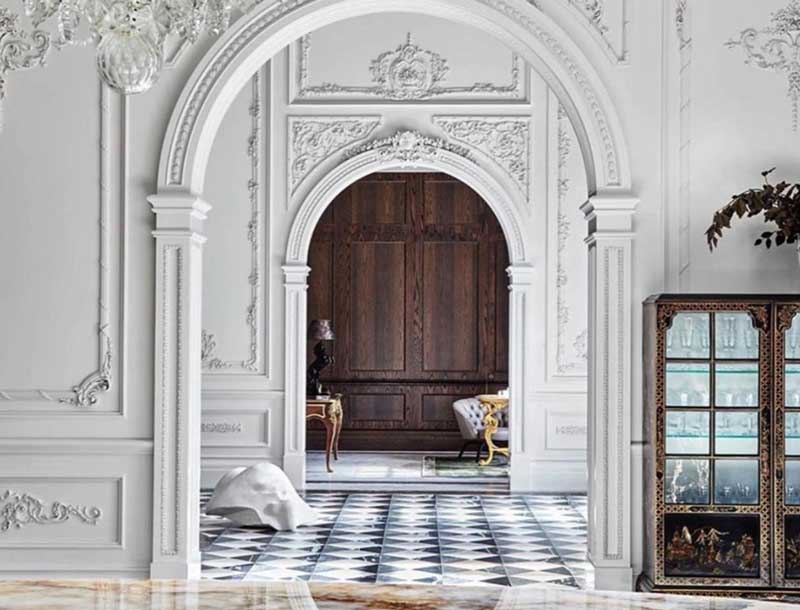 Best Vibe for When Netflix Just Gave You Like $400,000,000 or Something (@deluxe.confidential)
The newly rich gotta live somewhere, right?? Might as well cash out on all those moldings? 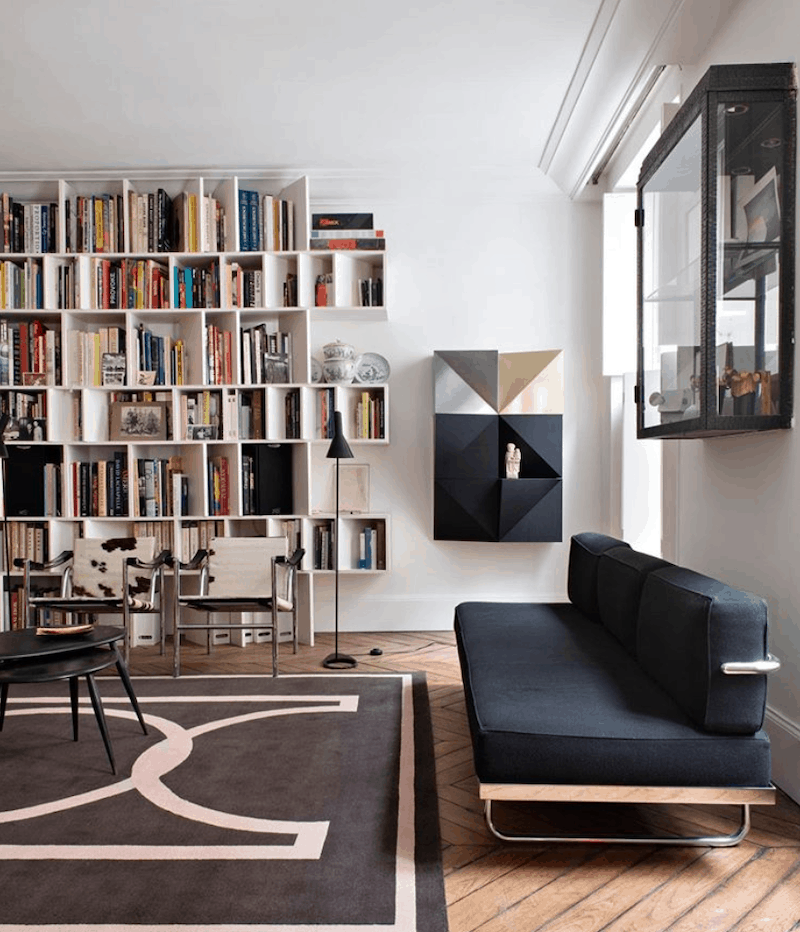 Best Entire Wall of Books (@design_east_)
Also, those parquet floors! Get another look at the shelving, designed by architect Benoit Dupuis for his own apartment, here. 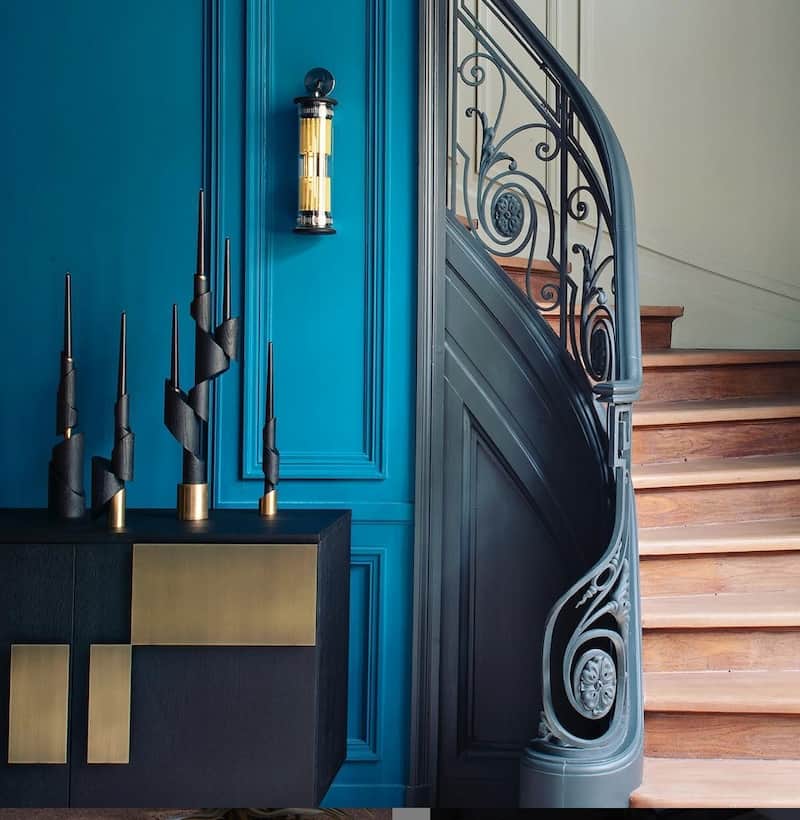 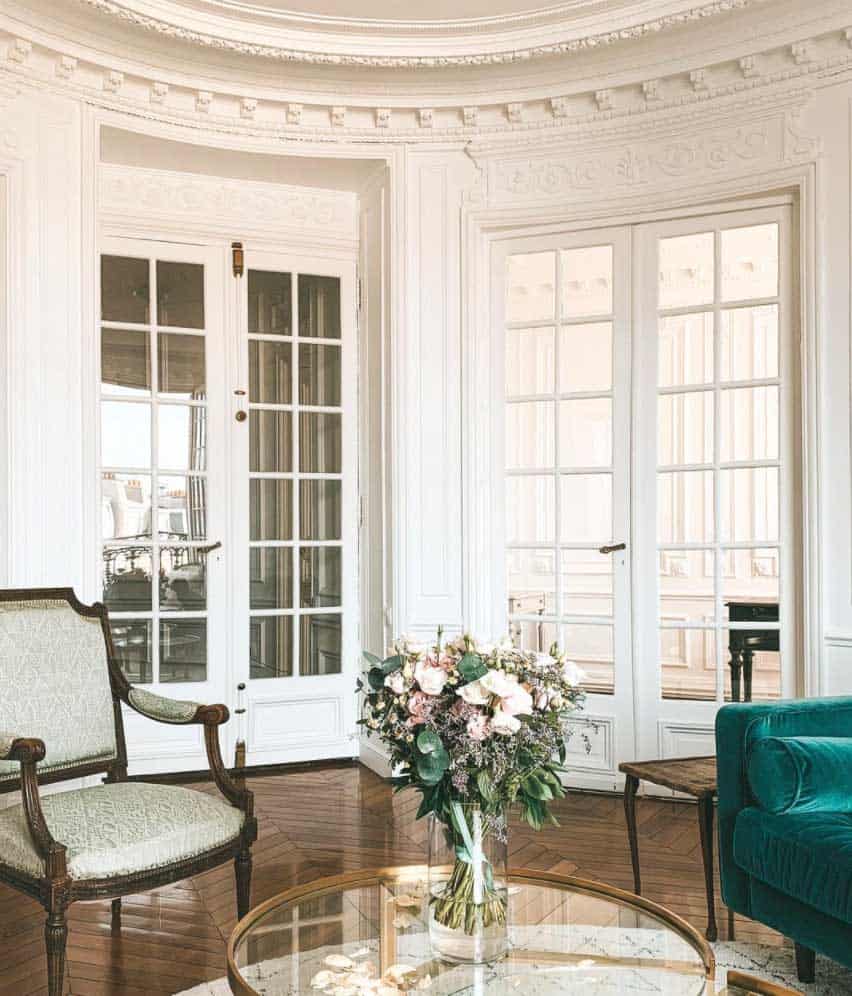 Best Round Walls (@emilytaubert)
Nothing says luxury like walls that are round when they could have been straight (not kidding!!). Also: bonus points for those herringbone-style floors (fast fact, that pattern is called point de Hongrie here). 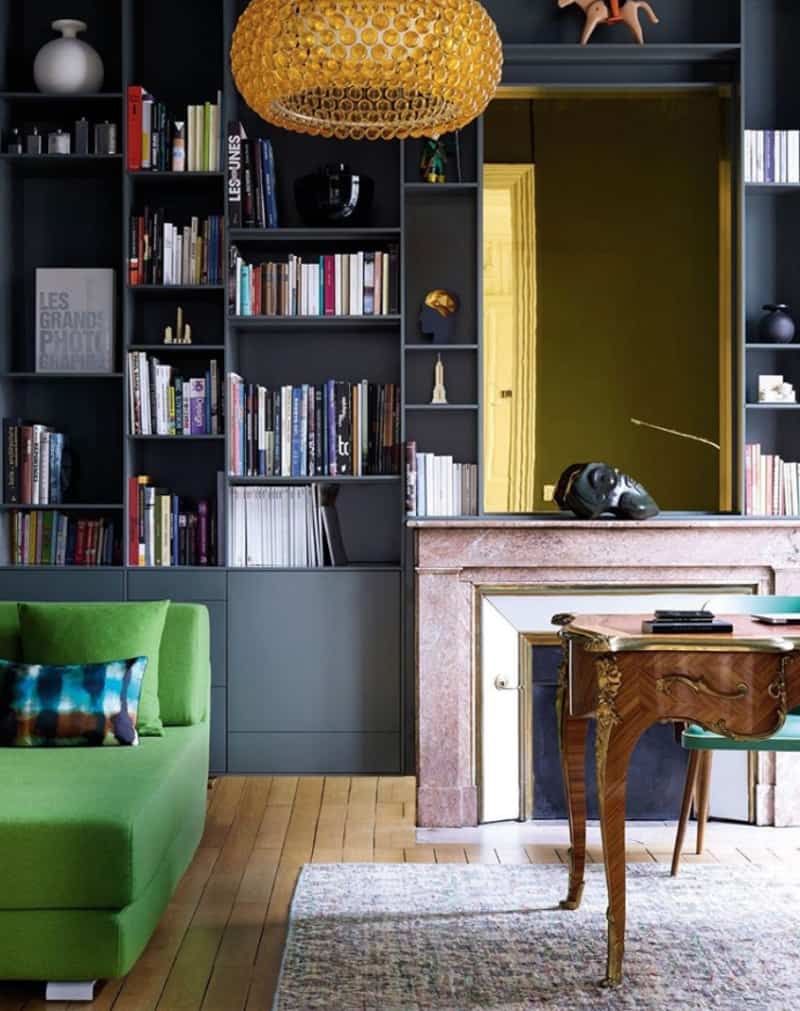 Best Pink Fireplace of All the Paris Apartment Interiors in Paris (@marieclairemaison)
Now that looks expensive. 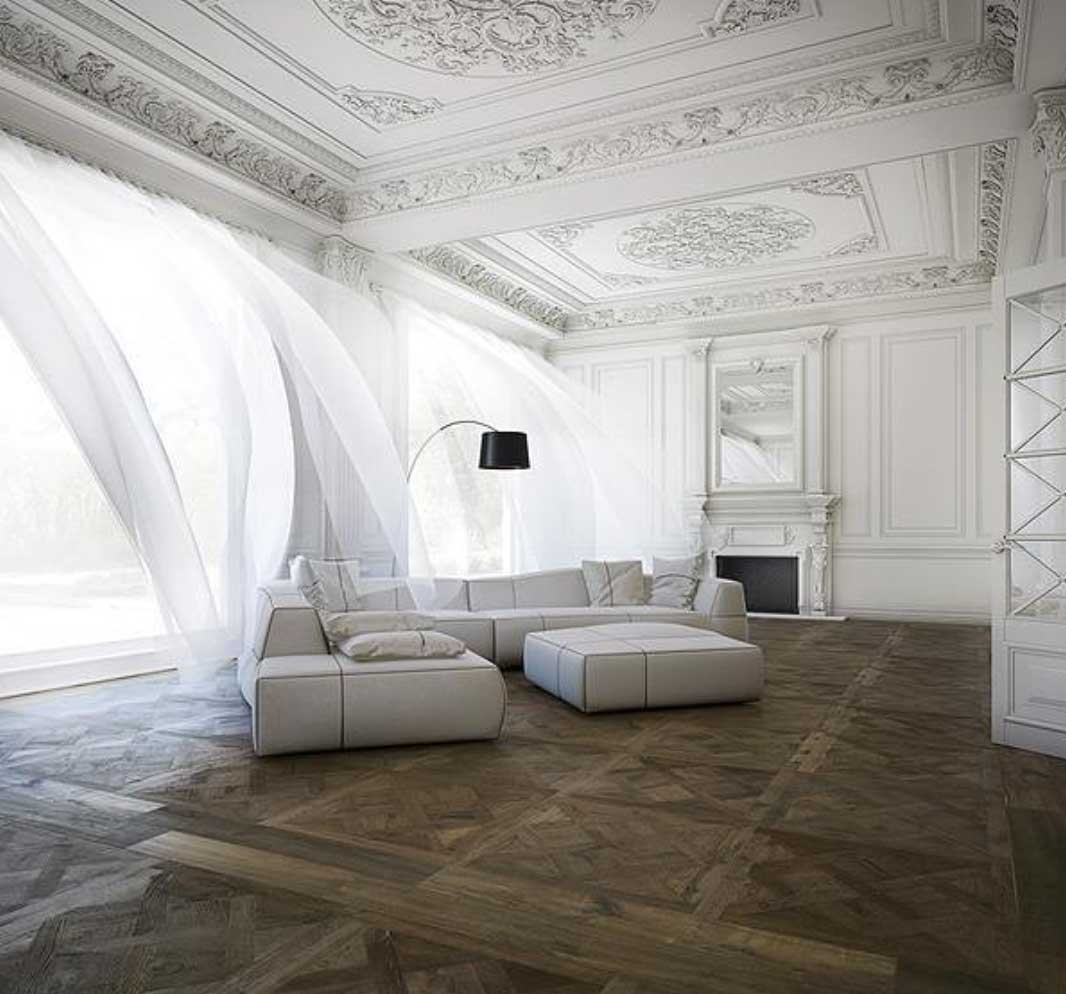 Most Ridiculous Use of Curtains (@paris.by.design)
That is just not a realistic way of living but also very beautiful. 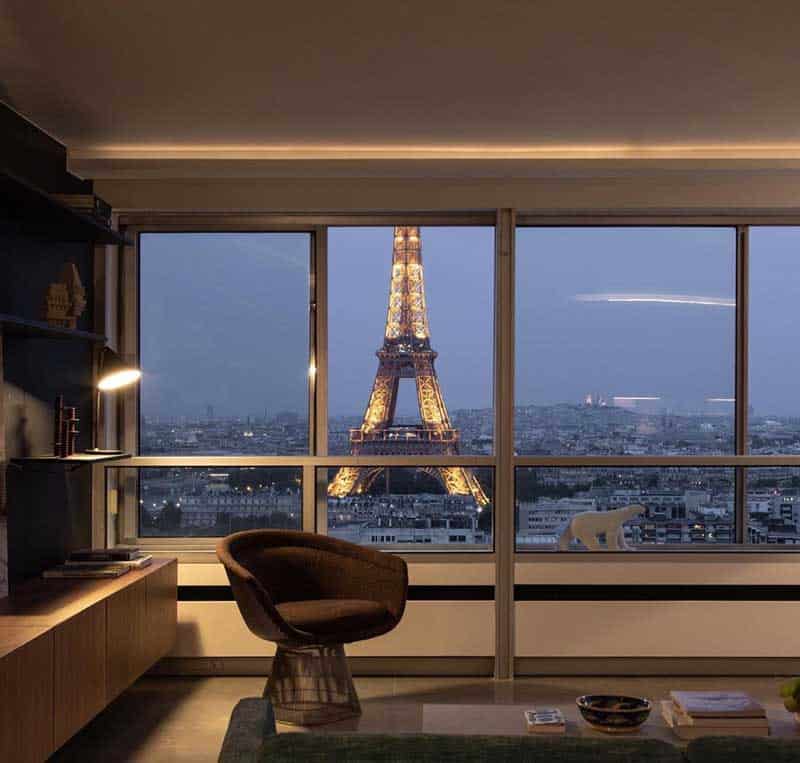 All-Time Best View (@bossardarchitecture)
Tough to beat those windows, even if the interiors are actually a little meh. 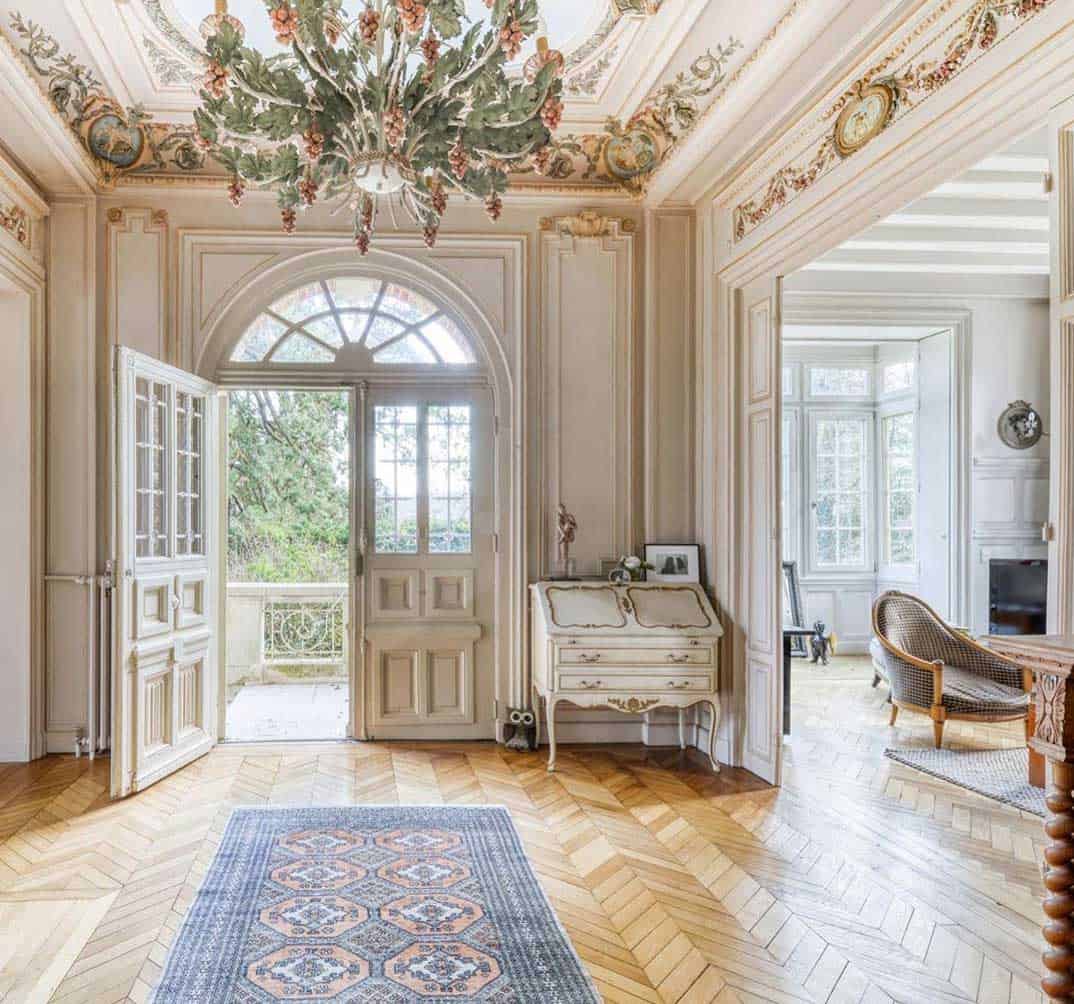 Best Second House in the Country (@parisouestsothebys)
Guaranteed: There is a horse immediately to the left. 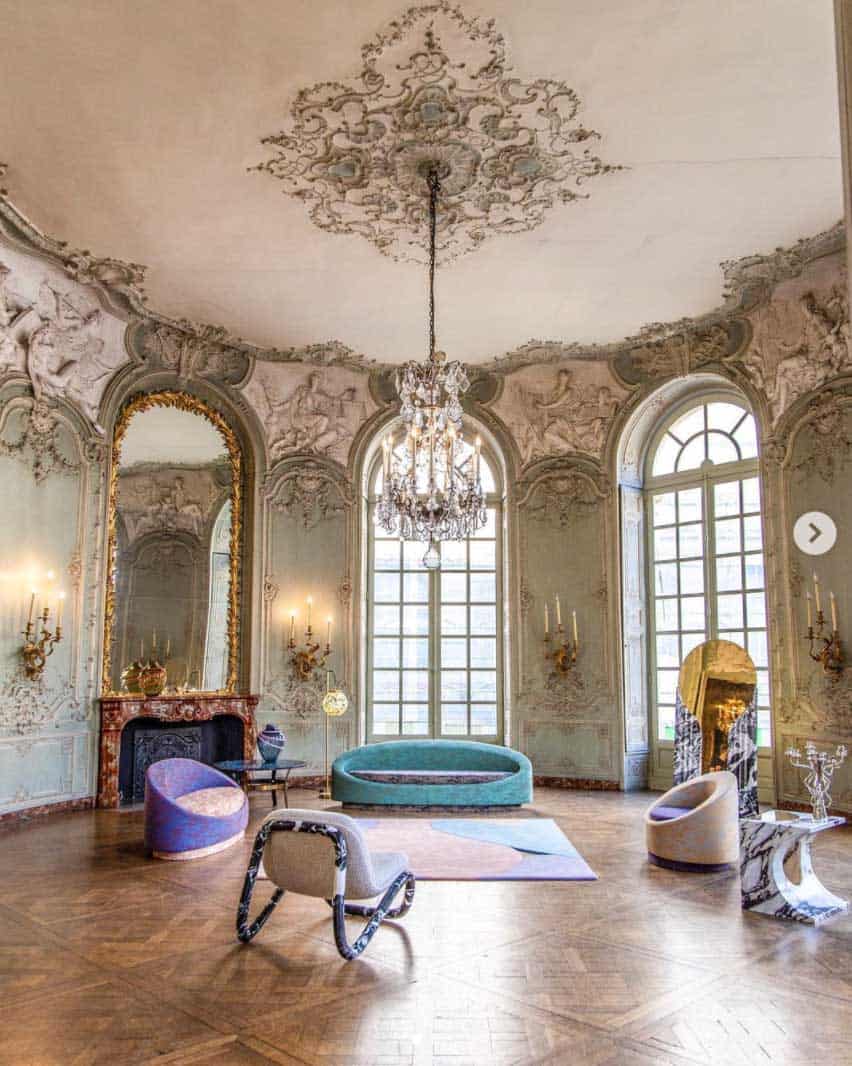 Best Fantasy Space Mixing an 18th-Century Mansion With Some Very Futuristic Seating Units (@theglitteringunknown)
This isn’t quite a Paris apartment, but an exhibition space for Maison et Objet, the big Paris design show, at the Hotel de Soubise, which is better known as the site of the Museum of the National Archives, as designed by Pierre Gonalans. (Here’s another look — it’s beautiful!) 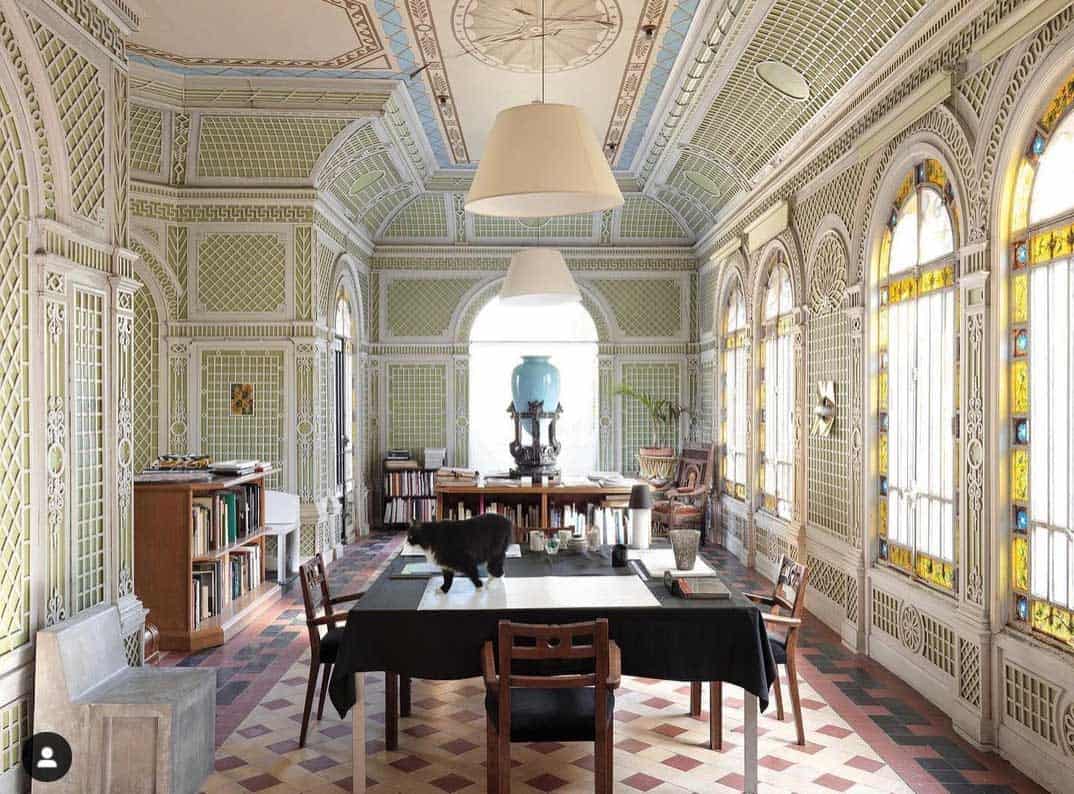 Best Home Office (@icondesignit)
Speaking of, from Pierre Gonalans’ home in Meaux: “a big Anglo-Norman house full of contemporaneity. Louis XIII furniture and Chinese antiques.” Even if these interiors are not strictly Paris apartment interiors (Meaux is about 40 minutes outside of the city) … wowzers.

Looking for more? Here’s a previous edition, with more rich people making their houses look extremely fancy for the photos.