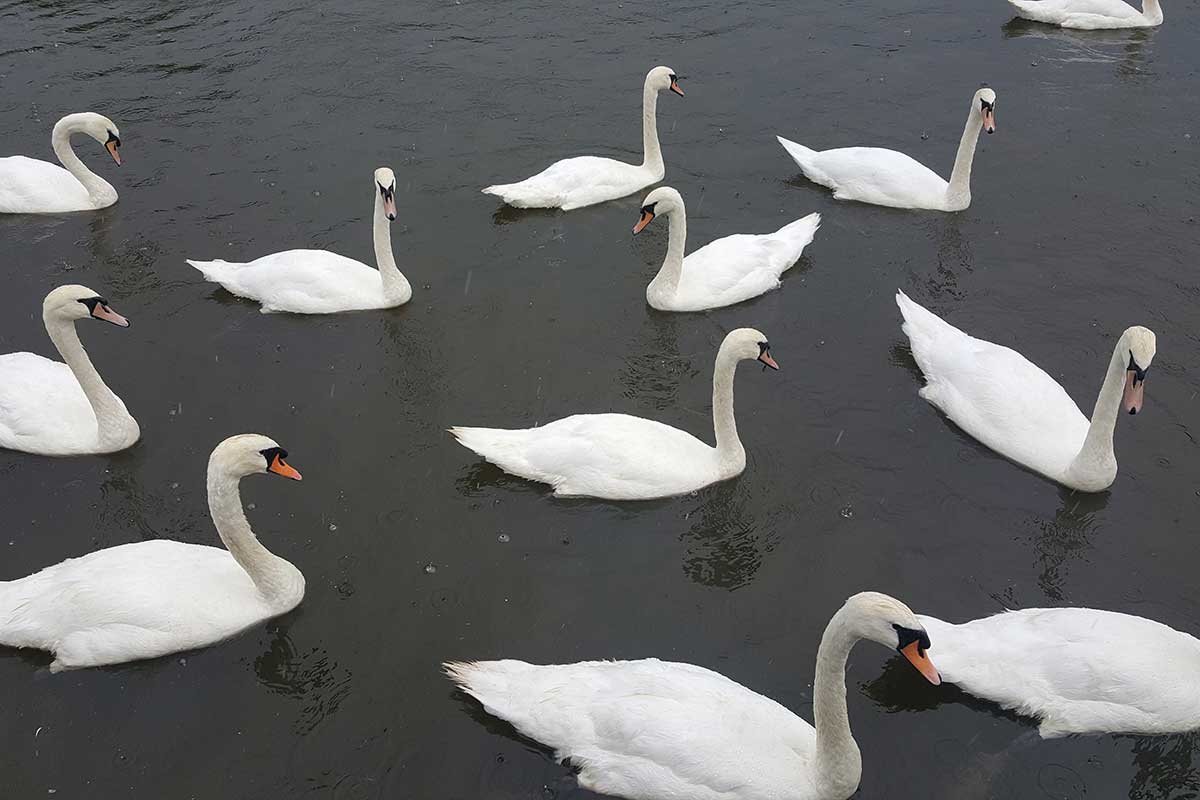 I recently walked the Thames Path, a nearly 200-mile walking trail along the River Thames. These are some of the questions I asked, and can now answer.

I wrote a separate post detailing all of my Thames Path accommodations, including what I paid.

From a technical perspective, it is an easy walk: It is nearly impossible to get lost and there’s basically no elevation gain. From a psychological perspective … (see below).

How long does it take to walk the Thames Path?
It took me about two unhurried weeks to walk the entire thing, which I was obligated to split into two sections: from London to Henley-on-Thames in July, and from Henley-on-Thames to the source of the river in September and very early October.

Where do you stay along the Thames Path? What about Thames Path accommodations?
I stayed in Airbnbs in London — and actually, because the river’s path is so serpentine and access to public transport so easy, I stayed in the same Airbnb for three nights at one point, hopping on the Tube at the end of the day (or even, when I was very tired one day, an Uber). (The Thames goes almost 30 miles within London, which means depending on your pace you might have a few days there.) I liked this, as the sheer volume of Airbnb rentals in London proved to offer better accommodations and better value (and of course it allowed me to walk without carrying most of my gear.)

Once returning to London failed to make practical sense, I booked river pub rooms or hotels a day in advance, mostly using Booking.com.

How much special gear do you need?
One of the best things about the Thames Path is that you need very little. I brought a single guidebook and no additional maps — you follow the river for almost the entire path, so there’s very little routefinding to be done. I basically showed up at the Thames Barrier with my backpack, in leggings and walking shoes, and started on my way.

The only thing I spent money on was a waterproof Marmot jacket. I walked in a well-broken-in pair of Adidas trail running shoes that proved more than adequate — until the very last day, when the incredible weight of river gunk proved too much and one of them came literally unglued and fell apart. (I was lucky it was the last day.)

Which way along the Thames Path did you go?
This is a deceptively simple question!

I chose to hike from the Thames Barrier to the source, for no other reason than I was coming to London from Paris — also it seemed (rightfully) that getting to the source would be a pain, and for my first day, since I was already coming from Paris, I wanted to cut down on further travel before walking. So I walked — and for two weeks, I saw the river get smaller, and smaller, and smaller. This means that you get lonelier, and lonelier, and lonelier. You literally go from London to a spot in a field. For most of the way, you’re walking through suburbia. Toward the end, you are properly in the countryside. Traffic on the river — pleasure boats, rowing boats, crew teams, swimmers — has trickled to nothing. Everything has trickled to nothing, including the river. (See photo below.)

It is deeply humbling, and it was for me not not deeply disturbing, to watch the river become smaller and smaller until it is nothing but a stream through weeds. And then even less. One of the best things about walking the Thames Path is the relationship you develop with the river itself: It becomes a companion. I think the TP is unusual among long-distance trails in a peculiar way: its popularity means that you share the path with thousands of people who aren’t walking the trail — just enjoying the river — so those opportunities for trailside companionship (or simply meeting people) are fewer. I met only a handful of people who were walking the trail like I was. This means that one of the significant relationships you build — possibly, as it was for me, the most significant relationship you building — is really with the river itself.

As a result — I’m writing this six months after finishing the trail — you observe its diminishment with real sadness. It is existential. I watched something become less of what it was. It was natural and right, but even after all this time, I find it incredibly sad.

I have read that this phenomenon is not unique to walking upriver: Downriver there is a similar sensation but in reverse, as you walk along as the river achieves maturity and then loses itself in the wider universe, as it joins the Thames Estuary and then the North Sea.

It’s really a philosophical choice. I want to believe that our lives become bigger and richer and more peopled, as it were. Because of that, if I did it again, I would only hike from the source to London.

But I don’t think I’d walk it again. I’m glad I did it. But I don’t ever want to see a river die (or be born in reverse) again.