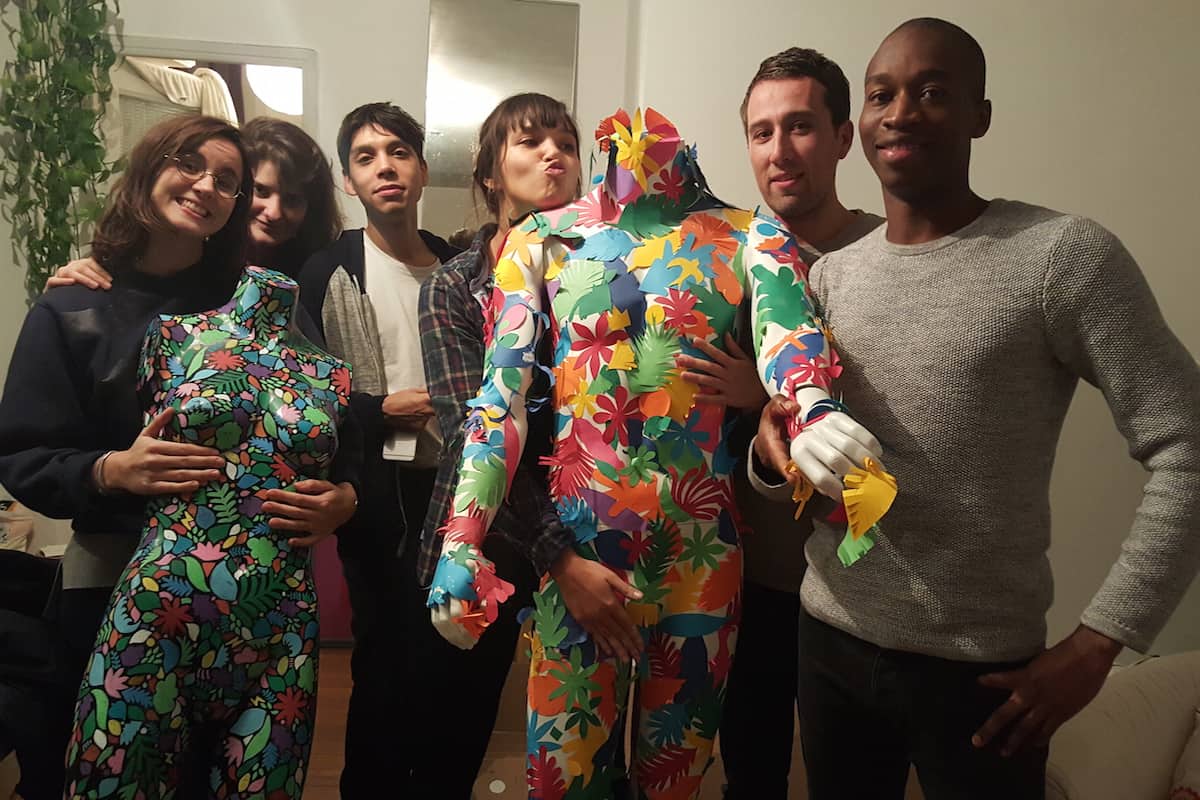 Let me jump directly to the point where we think we are about to die: I am sitting in the Café de l’Industrie with A., the cousin-once-removed I have never met before, when I turn to the windows and see people streaming by.

“Oh,” I say. It’s the Rollerbladers, I think, because it is Paris, and it is Sunday night — this is important, that it is Sunday, and not Friday — and there always seem to be parades of Rollerbladers Rollerblading down the street on Sunday evening. “Oh,” I say, turning, even as I’m realizing that they are not Rollerblading but running — but from what? From something. I am turning toward A. but also, now, realizing that everyone in the café — which is packed, not a seat to be had — is up and then down and then on the floor. A., somehow, is under the bench, on which I am sitting — and how did that happen? Words cannot convey my surprise. OK! I think. This is the part where we all get on the floor!

Everyone is standing up, though, so whatever has been said has some sort of meaning, and that meaning is: Stand up. The street, now, is empty, and people are not going out the door but into the courtyard, away from the windows. We are the last of the people left in the café, they have all gone into the courtyard, and I collect my one bag, my other bag, and a box I picked up on the street to use for a package. I might as well keep the box, I think. I am thinking of the people in the World Trade Center, who went back for their bags, and I am also thinking But I really need my keys.

We walk into the courtyard, which seems to extend all the way to République, and I think: How far does it go? Does it go a mile? Others are going up the stairs. Could everyone live here? It seems impossible. A. wants to go upstairs and I have no opinion on the matter so I agree, but I am in charge of grabbing the door to the stairwell before it closes. It closes. We are locked out. We are standing in front of two large doors that open to the street, and an idiot opens them to take a peek and we want to kill him. A French woman, in the opposite doorway, says something else I neither understand nor remember, but when I say Le code, c’est quoi? she answers, twice, because the first time I can make no sense of either the letters or numbers and just stand there dumbly, staring at her. I enter the code. The door opens. We go up. It seems unlikely the terrorists would go upstairs. A. says something about a roof, and I think of Brooklyn and I think of how I have never been on a roof in Paris and I am about to say something about how I don’t think there will be a roof when I stop: I do not know anything. We are at the tail of a line of people that somehow funnels into an apartment. A plant hangs in front of a window and L., whose apartment it is, has turquoise and white tiles on her kitchen floor. “I’m sorry it’s such a mess,” she says, in English, pointing to a stack of unboxed IKEA shelves. “I just moved in.” It is like a housewarming party except everyone is staring at their phones and calling their friends. There’s shooting in the Marais, everyone agrees, people fleeing République, gunmen on the metro at St. Paul. Or maybe not. Or maybe yes. The information is confused. I call my sister, who is driving, and her husband cherry-picks relevant headlines from Twitter. I hang up on her mid-sentence. The phone lights up as she calls back. “You should maybe get that,” A. says. “People do not get off the phone like that in situations like this,” my sister says.

People suggest various news sources with conflicting accounts: France Info says this, CNN says that. We check Twitter and Facebook. The gunmen are, maybe, only a rumor. The panic was short-lived. The mood shifts: Maybe we aren’t about to be murdered, in the middle of pre-dinner drinks on a Sunday evening. Suddenly L. is opening a bottle of wine and passing out cigarettes. Two men leave, followed by a woman. We are the only interlopers left. I remember that in the pocket of my jacket I have a box cutter, which I had earlier told a friend would be my only concession to the terrorists. I have not had the opportunity to use it. I think of Ben Carson. We sit down.

L. apologizes and says she only has rosé. I do not remember this, the rosé problem, from September 11. On the list of things that differentiate September 11 from now, I add rosé. We take two glasses of the rosé and thank her. We sit across from a man named Cyril, who is from Tours. (“And that is the other Cyril,” he says, pointing to his friend.) He asks if we were in the kitchen. At first I think he is asking if we are the kitchen staff, though this is impossible because he has heard us speak and knows we are American. The kitchen does not sound like an appealing place to be. “Were you in the kitchen?” I say, or A. says. Cyril was in the kitchen. “There were 20 of us,” he says, “and we were like this.” He mimes people huddled together. “There was no exit,” he says. “There was nowhere to go. We were just waiting.” Then, or maybe later, the other Cyril laughs, or grimaces, and points to his T-shirt, which is gray and printed with the words “SURF IN PARIS.” There are no words in either language to express awaiting your death in the corner of a kitchen in that particular sweatshirt.

We agree that the kitchen was worse than under the bench. “I think you may have bad dreams about the kitchen,” I say. I do not want to be negative, but this feels quite obvious.

Cyril tells us that the French way to say “first-cousin-once-removed” is petite cousine.

“We will never forget you,” I say, in French, to Cyril, after practicing it in my head many times. “Vous êtes nos anges.”

There is less hugging in Paris than New York so we ask if we can take their picture. I am conscious of the fact that my hair is very puffy, which seems like a thought from an entirely different life. On the way out, I remember to bring my box.

Above: The Parisians who let us hide in their home. Cyril, from Tours, is on the right. Other Cyril is next to him, second from right. The woman in the middle is L., supplier of rosé, and shelter, and the artist behind the two pieces displayed.