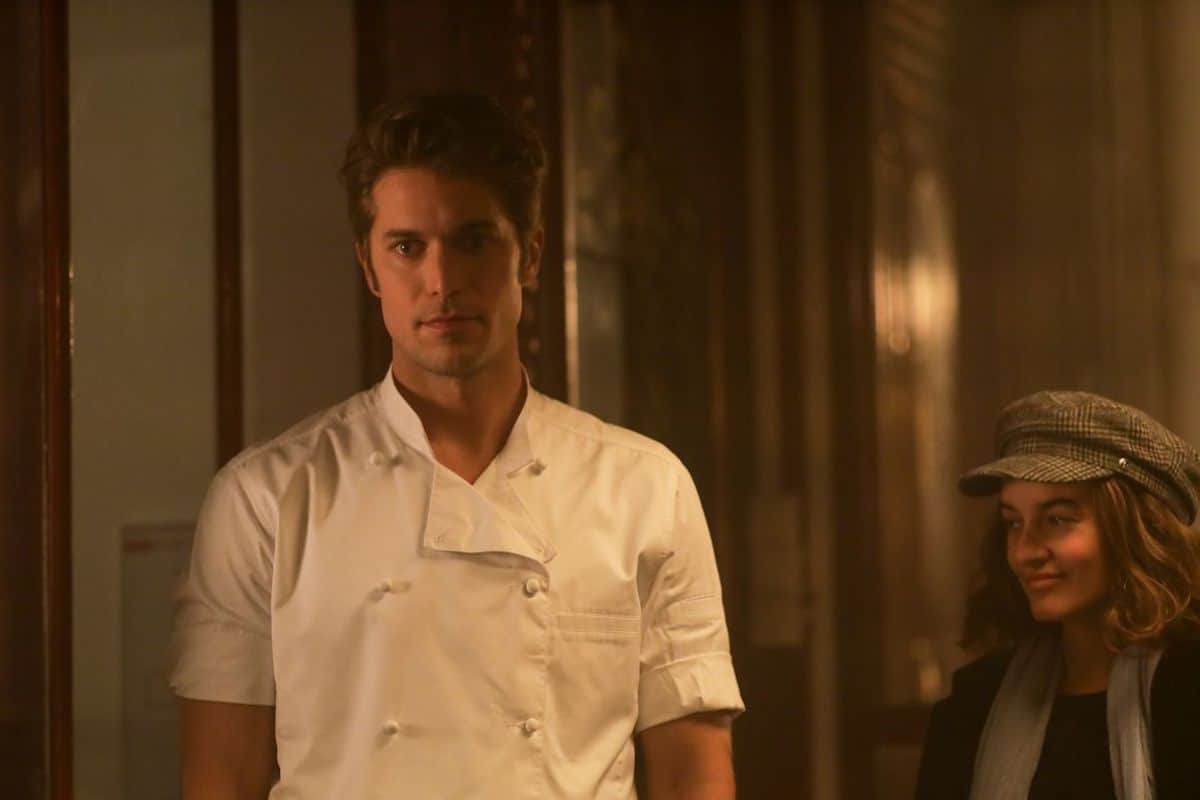 I didn’t meet Francois in my building, like Emily met Gabriel, her not-single chef: I met Francois, my not-single restaurateur, in an even cuter way: His parents sold me a vintage desk lamp at a garage sale.

The desk lamp was adorable, and his parents, equally so. Along with the lamp, they gave me a card for their son’s restaurant, which happened to be a 10-minute walk from my apartment. “Stop by!” they said, in their perfect English. “Talk to Francois!” I did. He looked not like Lucas Bravo but like Eddie Redmayne, which for me, was a win. I told him to thank his parents for the lamp. He gave me a basket of something like cheese biscuits(?). He told me to let him know if I had any problems with the lamp — so when it stopped working a week later, I emailed him.

This time, instead of meeting at the restaurant, we met at the apartment above his restaurant. I looked for any signs of a partner — he was just moving in, he said. There were none. He fixed my lamp with a screwdriver and electrical tape, which I thought was admirably handy. He had a terrace with a small jungle of plants on it and a vintage globe, and we played that game you play with old maps, where you try to guess what year it was made based on whether it has Russia or the Soviet Union, South West Africa or Namibia, Suriname or Dutch Guyana. I won. (If nothing else, I always win this game.) We sat on the terrace. I was going back to America soon, I said, so would he watch my plants for me while I was gone? He would. I delivered them.

When I picked them up a month later, he mentioned that he had a baby. A what?

That was weird, I thought, but people have babies all the time(!). I had actually never met anyone who had a baby while simultaneously not acting very much like a new dad. I had seen his apartment — there wasn’t a baby in it. Where was all of this happening? How did these people live their lives?

This went on or a period of months: I went to his apartment with a pint of Ben & Jerry’s ice cream ($9), which we planned to eat on his terrace. (That terrace!)

As we discussed our plans for the summer, he mentioned another baby.

What can I say? I feel like sometimes the thing about living cross-culturally is that your brain just wants to fit people into familiar boxes: I’ve had plenty of friends who were new dads, and it would have been impossible to imagine them staying out until 2 or 3 a.m. every morning, to spend all these hours chatting with me in a terrace evidently far from wherever the baby might live. And I assumed that because I had not seen that phenomenon before it could not exist. But of course: There are (obviously) (obviously!) fathers whose partners (let’s call his Camille) have recently done them the huge and impossible-to-return favor of bearing them children, and those fathers will spend significant amounts of time away from them, on their own frivolities.

I hope his Camille had a series of lovers, or a gigantic garden all to herself, or whatever frivolity she wanted for herself.

As for me: I think this, better than any other relationship I have had in France (including much more serious/intimate ones), is my metaphor: The French say that Americans are not realistic in our ideas about love, in the idea that one person can be “our everything.” But I think they are too cynical. I know more divorced Americans than French ones, but I also know more happy American couples than I do French. And if that aligns to ideas about how American culture is binary — good! evil! wrong! right! happily married! miserably married! — and French cultured is constructed on an endless succession of nuances (there is no good or evil, only variations….), I am … not surprised.

As for Francois: I picked up my ice cream, and instead of going to a reading by the American author Ruta Sepetys, immediately went home, and never spoke to him again.