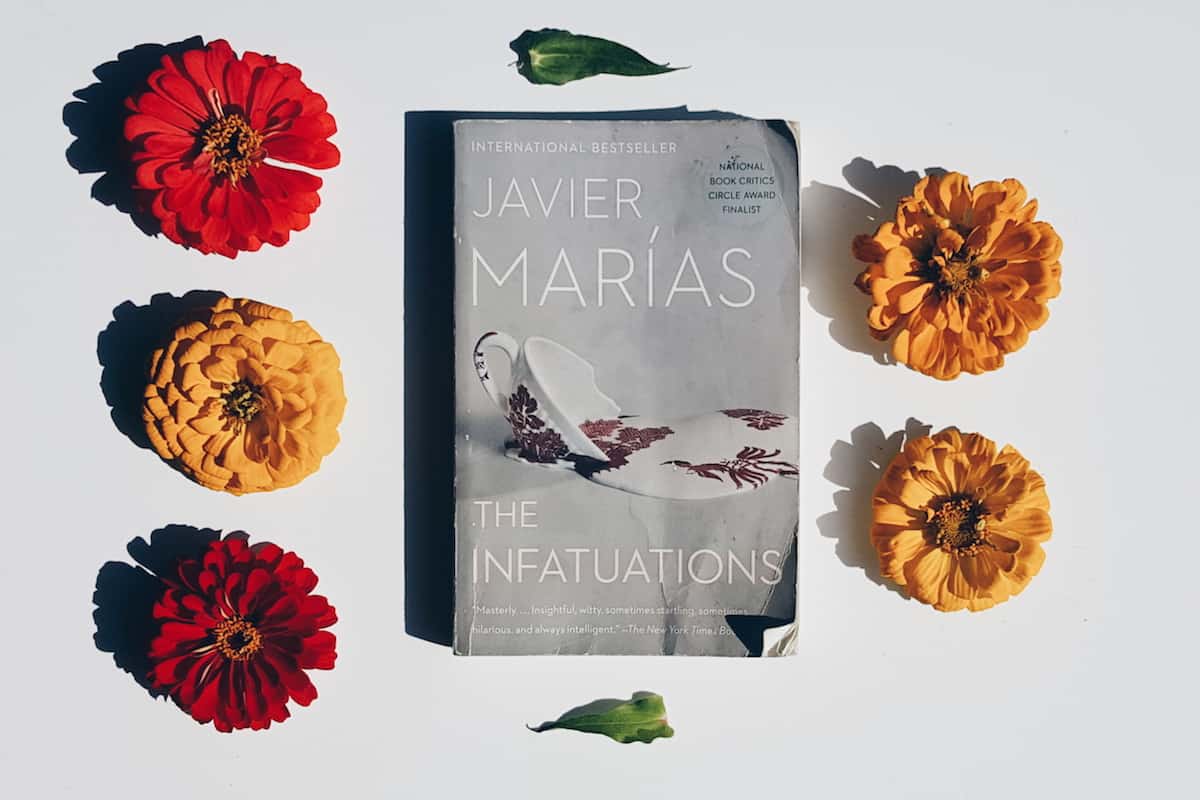 This is my Spain book: The Infatuations by Javier Marias. I am reading a book from every country in the world. The last book I read was Poland: This Way to the Gas, Ladies and Gentlemen, by Tadeusz Borowski.

IN SHORT: This is the story of a woman whose life changes in strange ways following the murder of a man she admired.

THE BEST BIT: I’m not sure that I have a best bit for The Infatuations, which does not so much play out, in a linear sense, as it does unspool, unravel, un-everything: disintegrate into liquid like the tea cup on the cover of its American edition. The reason the book in the image above looks so worn is because it is exactly that: This book and I spent weeks together, as I followed, or tried to follow, the story — which is not so much story as it is a series of ruminations.

Though there is ruminating, much does happen in The Infatuations. Murder, even — something I knew and left me expecting something closer to a police procedural than I had any right to expect. As we open the novel, the narrator, Maria, learns that a man has been killed. He is not a friend, exactly; he is one half of a couple who eat, in the morning, at the same Madrid café. Not long after the murder, Maria meets his widow, Luisa, and soon finds herself wrapped in Luisa’s story in unpredictable ways.

There are long passages in The Infatuations considering the nature of love, death, loss, grieving. This book is made of a million soft edges; arguments persist but only as they are simultaneously fractured, ground down, worn away, often by the same person who argued that position in the first place. It is, surely, reflective of how we contend with the world around us, even as it can make for exhausting, discursive reading. With those soft edges come hard sentiments:

Most widows get over their grief quite quickly, especially if they’re fairly young … If [Luisa] were only able to imagine herself in a few years’ time or even a year, she would see then how the image of Miguel [her murdered husband], which, at the moment, haunts her incessantly, will fade and shrink with each passing day, and how her new love will allow her to remember him occasionally and with surprising serenity, always with sorry, yes, but hardly with any sense of unease. Because she will experience new love, and her first marriage will almost seem eventually like a dream, a dim, flickering memory.

Do you like to believe that love persists? If so, The Infatuations is perhaps not the book for you — or it may well be, but prepare to man your defenses. Love is proven to be mutable in ways the more innocent-hearted among us may find sad and unsavory.

I never totally connected with Maria — she was too slippery, too permeable, to wrap either my head or my metaphorical arms around — but I did not doubt her humanity or the shifts in conclusions: I cannot maintain a position on lunch with any certainty — I love it, I hate it — so why should she remain firm in her ideas on the nature of loss, or, more prosaically, the motives for Miguel’s killing?

The result is truly, and unusually, confounding. I did not hear my thoughts reflected in her; her thoughts do not resemble my own. The manner in which she thought, and expressed, those thoughts, was familiar, even as they were difficult to follow, even as they blossomed and withered and blossomed again. “It seemed to me that he had become slightly confused or was trying to confuse me,” Maria thinks after Javier, the murdered man’s best friend, speaks aloud the passage quoted above. How many layers of hedging can exist in one sentence? She is not sure of her conclusion; it only rises to the level of “seeming.” And what seems to be true is, itself, in doubt; it might be one of the two things stated — he was confused; he was confusing — or, the reader intuits, one of millions more. There is so rarely clarity in this book; there is so often failed intuition, bad guesses, forcefully presented hypotheses soon punctured by new facts, opposing ideas, or more bad guesses. This is why I say I did not find comfort in Maria’s thoughts, the way we sometimes do with our narrators — that sense of me, too. I did find my way of thinking reflected in Maria’s way of thinking: the rhetorical blind alleys, the meanderings and unanswered questions.

In a much-quoted passage, Marías writes:

Once you’ve finished a novel, what happened in it is of little importance and soon forgotten. What matters are the possibilities and ideas that the novel’s imaginary plot communicates to us and infuses us with.

I will remember the contours of this book’s plot, gentle as they were, because there is not much to remember. I have been infused with its doubts and uncertainties and schisms, and I will be haunted by its ideas: that we cannot know ourselves any better than those we love, that loss is temporary because our hearts are weak. It is strange to recognize how that second idea — the loss of loss — sounds more terrifying than an enduring state of loss, the maintenance of loss. (I am thinking of the Japanese dog that waited for its master to return home, for decades after the master’s death.)

When I put this book down, I felt relieved of the burden of this, what for me was its core idea. I think we prefer that we remember, and are remembered, in return, and that our love is more lasting, and less mutable than this.

Recent books:
Norway: The Ice Palace by Tarjei Vesaas
Europe: The World of Yesterday by Stefan Zweig
Portugal: Blindness by Jose Saramago
Germany: A Woman in Berlin by Anonymous