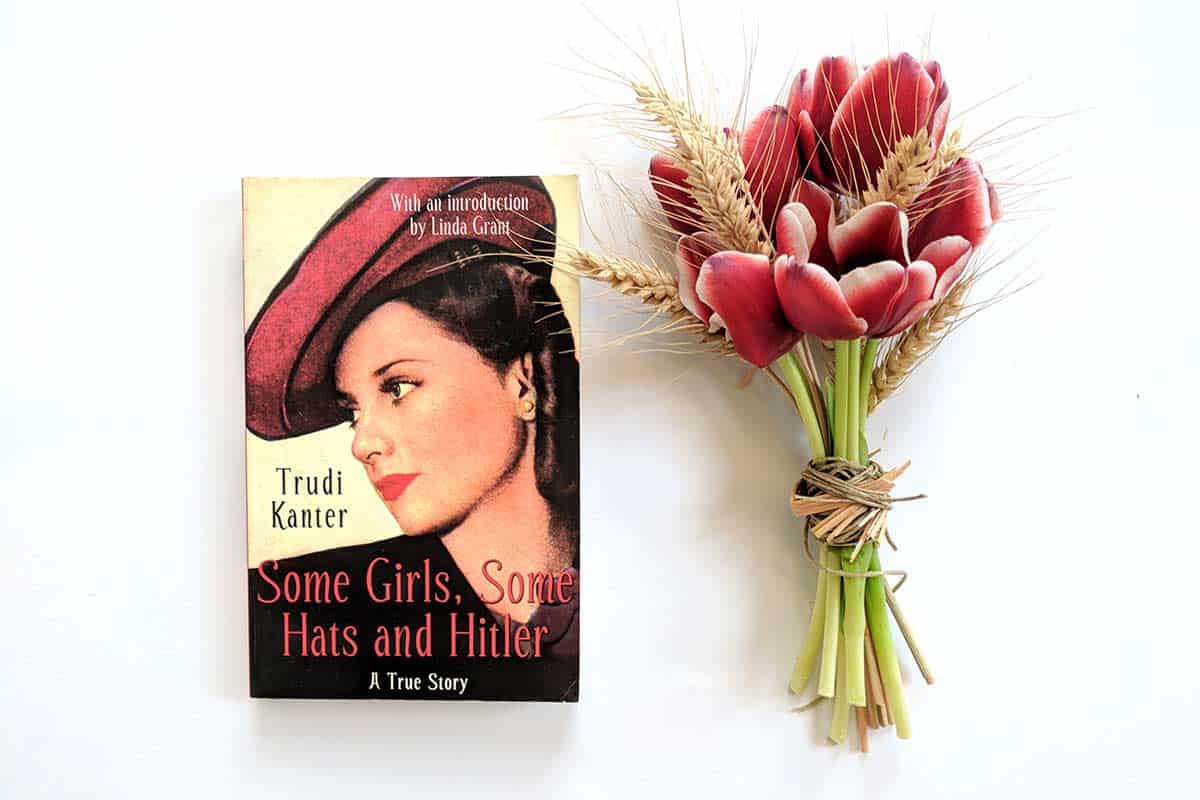 This is my review of Some Girls, Some Hats, and Hitler, my Austria book: I am trying to read a book from every country in the world. The last book I read was Pakistan: How to Get Filthy Rich in Rising Asia, by Mohsin Hamid.

THE BOOK: Some Girls, Some Hats and Hitler, by Trudi Kanter

IN SHORT: This is the ridiculously titled, profoundly moving memoir, originally published in the 1980s, of a singularly wily Viennese hat designer whose relentless invention saved her family from the Holocaust.

THE BEST BIT: This is a remarkable book. Is it the one Austrian book everyone should read? I don’t know. (I certainly liked it better than Stefan Zweig’s fiction or The Piano Teacher, both of which I tried first. See a review of Zweig’s The World of Yesterday here; originally intended as my Austria book, it is so devoted to the European project that I reclassified it.) But it is a book that everyone should read, period.

Trudi Kanter is a remarkable woman, and this is a remarkable memoir. Kanter was a milliner in pre-World War II Vienna, one with a successful atelier and, as she says in literally the first sentence of the book’s second paragraph, “a fashionable address: 11 Kohlmarkt.” This short, opening section is devoted not to the war but to Walter, her soon-to-be (handsome, and I believe unfaithful, and unwieldy) husband. (“For all his charm, Walter had the self-preservation instincts of the dodo,” writes Linda Grant in her excellent introduction.) “Of course I’d seen him before. … In a small city like Vienna, everyone knew who was who, and everyone knew who might one day be more than that.” Her preoccupation remains with him, her parents, and her work — not the larger machinations of the war. Holistic thinking would be a luxury she could not afford.

The entire book is told in this conversational, just-between-us tone, as Trudi travels from Vienna to Paris (for the fashion shows, in March 1938) just as Hitler marches his army into Austria. Against the advice of her Parisian friends, she returns (“Walter would never survive on his own”), as “squads of Nazis rampaged through the city. … Being Jewish, we are fair game, unprotected by law” — and so begins her desperate (but somehow still jaunty — this is an exuberant woman) effort to save her Jewish husband, her mother, and her Jewish father. It gives little away to reveal that she succeeds — how she does it, though, is an effort worthy of a 1940s heroine — worthy of Lauren Bacall. (Why this book has not been turned into a movie I have no idea.) It is worth pointing out that while she played a role in securing freedom for her immediate family as well as her ex-husband, Walter’s family, who failed to heed her concerns, died in the concentration camps. And it is worth considering the kindnesses — the mercy — she encountered along her way, not least from the Viennese trade official who allowed her, during the Nazi occupation, to travel to London, ostensibly, and only ostensibly, to sell her collection of hats, despite anti-German boycotts that would surely have not allowed her to do so. (“‘I have confidence in you. Many people would take this opportunity and never come back.'”) Many of the qualities that draw us to stories about World War II — the immeasurable stakes, the answer to the question of how far we will go for those we love — are amply evident here.

I love this book, despite its flaws. Kanter was a milliner, not, primarily a writer — this book, incredibly, is the product of a creative writing class she took well into her seventh decade. It is not a perfect document: It can be confusing at times, as characters step on and off stage without warning. (One, named Pepi, is half-introduced as someone eager to to invite her to his home outside Vienna — and only in time do we understand that this is her husband, from whom she is separated, and that part of the reason she cannot accept this offer is because she would be accompanied by Walter.) There are trips backward in time, to 1935 and 1936, that probably do the book’s momentum no great good. Who knows what she might have been able to accomplish if she had written throughout her life, instead of coming to it in her 70s? By all evidence she was a gifted designer of hats; she might have become as good or better a writer.

A note about this book’s provenance. As Grant makes clear, the holder of the book’s copyright is unknown, as she and Walter had no children, despite their hopes, and she had no siblings. Some Girls, Some Hats, and Hitler is her legacy. Trudi Kanter’s was just one story of millions, but it deserves to be remembered.

Recent books:
Pakistan: How to Get Filthy Rich in Rising Asia by Mohsin Hamid
Europe: The World of Yesterday by Stefan Zweig
Portugal: Blindness by Jose Saramago
Spain: A Woman in Berlin by Anonymous