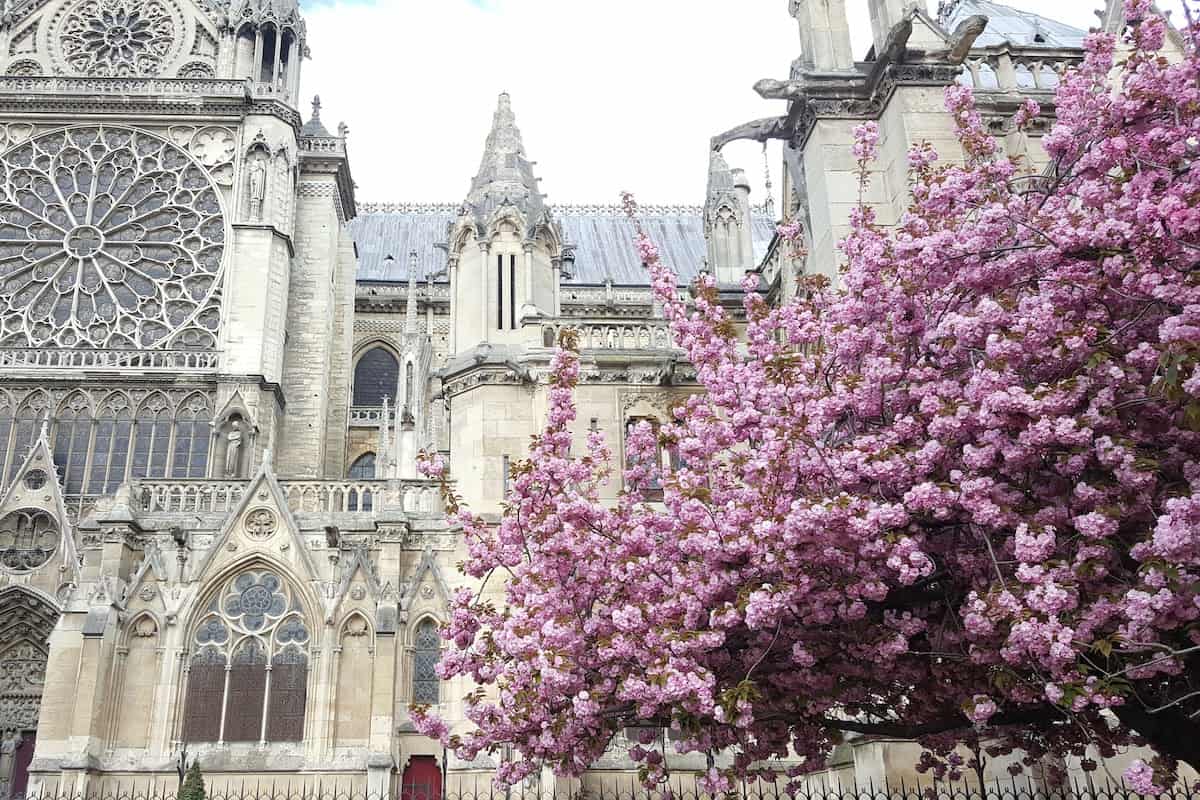 Spring approaches, and with it, cherry blossoms in Paris. Looking for flowering trees? Cherries and pears? New spring flowers? We have lots.

The first thing to know: Paris is an absolute wonderland when its trees bloom, which is generally at some point between mid-March and mid-April. (A quick review of my photos from the last five years point to an average peak-bloom date of April 1.) Honestly, it’s hard to go wrong: Walk out your door and look around and you will almost definitely see beautiful blooming trees, and if you don’t, go two more blocks, and you almost certainly will. (Repeat as necessary.)

But if you want to head somewhere specific, these are my five favorites. Of them, two reign supreme: the trees surrounding the Eiffel Tower — who doesn’t love a souvenir shot? — and the Jardin des plantes. And the Parc des Sceaux.

1. Notre Dame – Square Jean XXIII [map]
There are a number of lovely cherry trees on the south side of the cathedral and in the adjacent Square Jean XXIII (seen above). (Note: It’s inevitably crowded, so come early or late.) And from here, cross the Petit Pont to Shakespeare & Co. — gorgeous cherry trees are right out front.

2. Jardin des Combattants Espagnols de la Nueve [map]
This is a tiny park between the southern end of the Hôtel de Ville and the Quai de l’Hôtel de Ville. It’s super charming, and a quiet little space right next to quite a busy street. The picture above was taken there. There is, quite amazingly, a couple adorable rabbit hutches, right in the middle of the park.

3. Square Léopold-Achille [map]
Once part of a vast royal park that extended all the way to the nearby Place des Vosges, this park is now pretty small — but it’s a nice place to take a break when walking through the Marais, and there’s an equally lovely park (with fewer flowering trees) around the corner at Square Georges Cain. Across the street from Georges Cain is the Swedish Institute, offering Sweden-themed exhibitions and events, plus a good café. (See here for our other favorite parks in the Marais.)

5. Parc des Sceaux [map]
The Parc des Sceaux is officially in the Hauts-de-Seine, but anyone looking for cherry blossoms in Paris would be wise to include this spot just beyond the city limits. It’s easy to reach from Paris via the RER B, to either Parc-de-Sceaux or La-Croix-de-Berny. Nowhere in Paris has a better cherry tree situation; the park is incredible, but don’t leave without seeing the château, now a museum, as well. The Tsunagari Taiko Center hosts a cherry blossom festival here every year in mid or late April; in 2019, it’s April 20 and 21.

To make a full day of this, start at Square Léopold-Achille, stopping at the Swedish Institute for coffee and cinnamon rolls. (The closest metro stop is Saint-Paul, but that’ll mean retracing your steps — instead, try Chemin Vert, which is served by line 8.)

From there, walk to the Hôtel de Ville and then along the southern end to the Jardin des Combattants Espagnols de la Nueve. Head east along the Seine, crossing the river to the Ile Saint-Louis, stopping at Square Barye, on the island’s eastern end. Cross the rest of the way across the Seine, heading to the Jardin des plantes. Once you’ve had your fill of cherry blossoms, walk west along the Seine to Shakespeare and Co., then crossing the Petit Pont to Notre Dame and its park. And from there, head back to the RER B station at Saint-Michel, taking it to the Parc des Sceaux for the most spectacular show of cherry blossoms in Paris (or thereabouts). To finish up, take the RER B back to Paris, changing to line 6 at Denfert-Rochereau and taking it to Bir-Hakeim to get a look at the Eiffel Tower. Here’s your map for the pre-RER part: 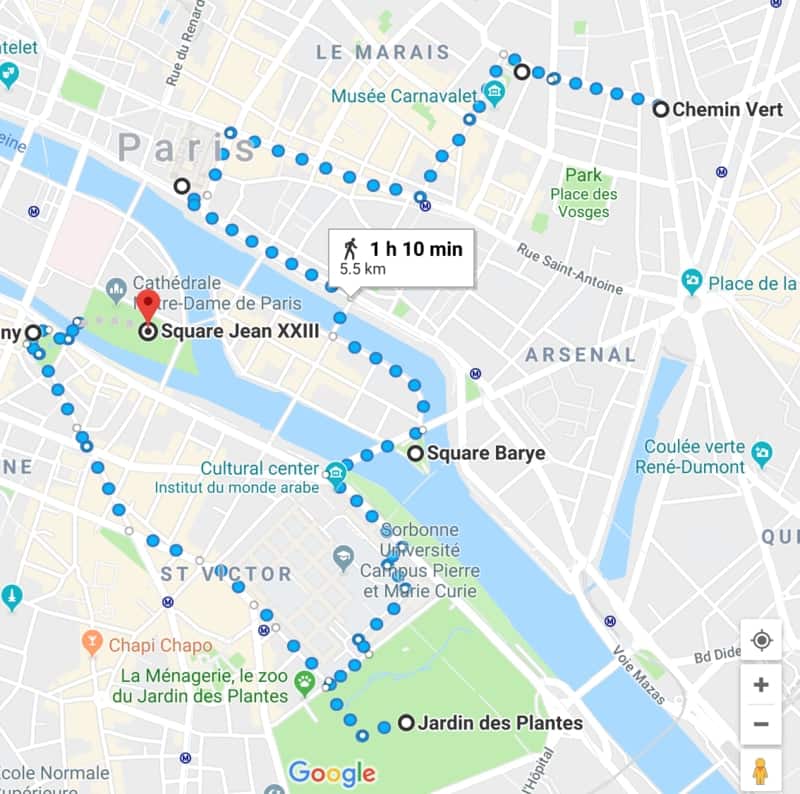