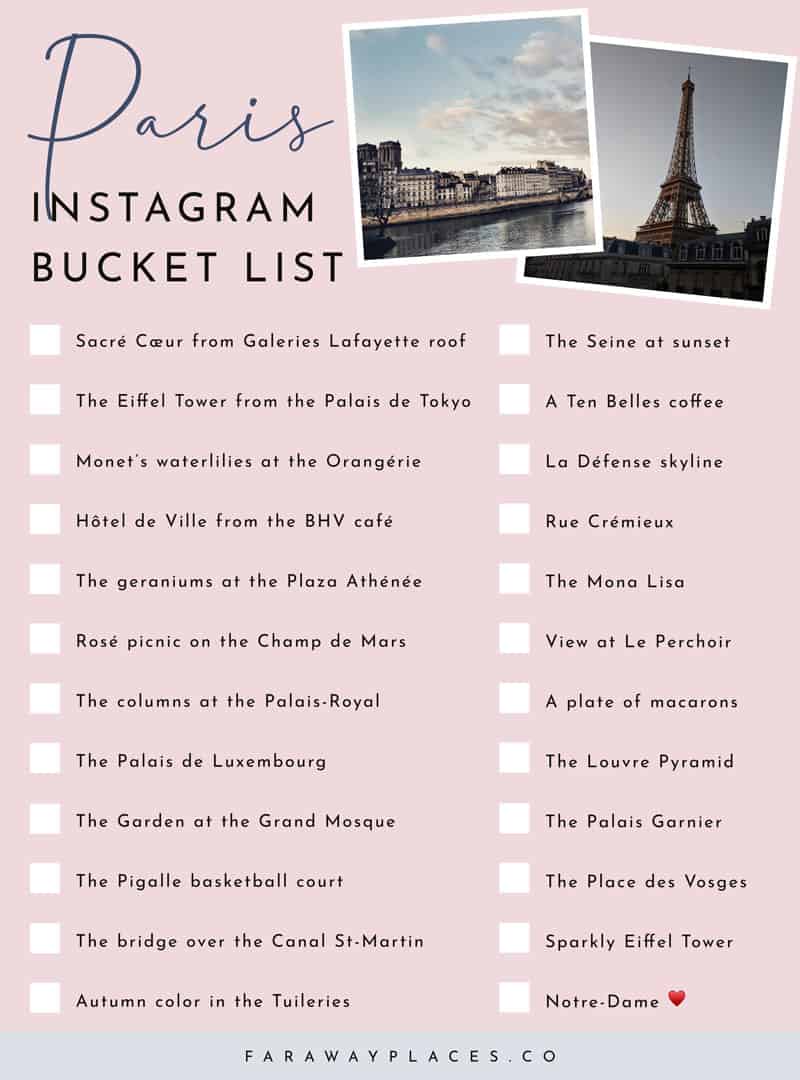 Paris. It’s the most Instagrammable city on the planet. But where to start? Here’s your Paris Instagram bucket list. All of these spots are cheap and easy to get to — you could do them all in a day if you were exceptionally motivated. Happy Instagramming!

At bottom is a map of all the locations below — see the full, zoomable map here.

1. Sacré Coeur from the Galéries Lafayette rooftop: Lots of Parisian department stores have gorgeous rooftop cafés; this one might be the best (though note #4 below.)

3. The Orangérie is rarely at the top of anyone’s museum list, but there’s no better place to see Monet’s waterlilies outside of Giverny. (For a walking tour of Paris’s best art museums, including the Orangérie, see here.)

4. You can’t go outside at the BHV café, but the view of the Hôtel de Ville is still killer.

5. The geraniums at the Plaza Athénée: There’s no more distinctive hotel facade in Paris — just ask Carrie Bradshaw, whose Sex and the City adventures stopped here. 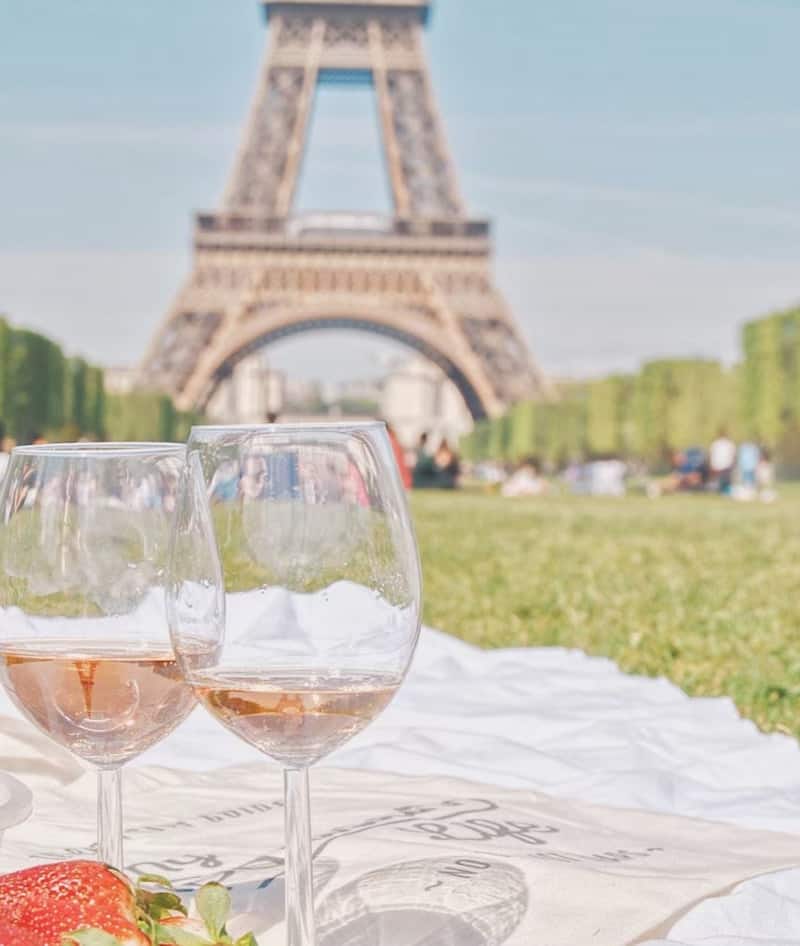 6. Rosé picnic at the Champ de Mars: Make another Eiffel Tower photoshoot that much better by adding rosé.

8. The Palais de Luxembourg: Ideally the boats on the pool in front of the palace. 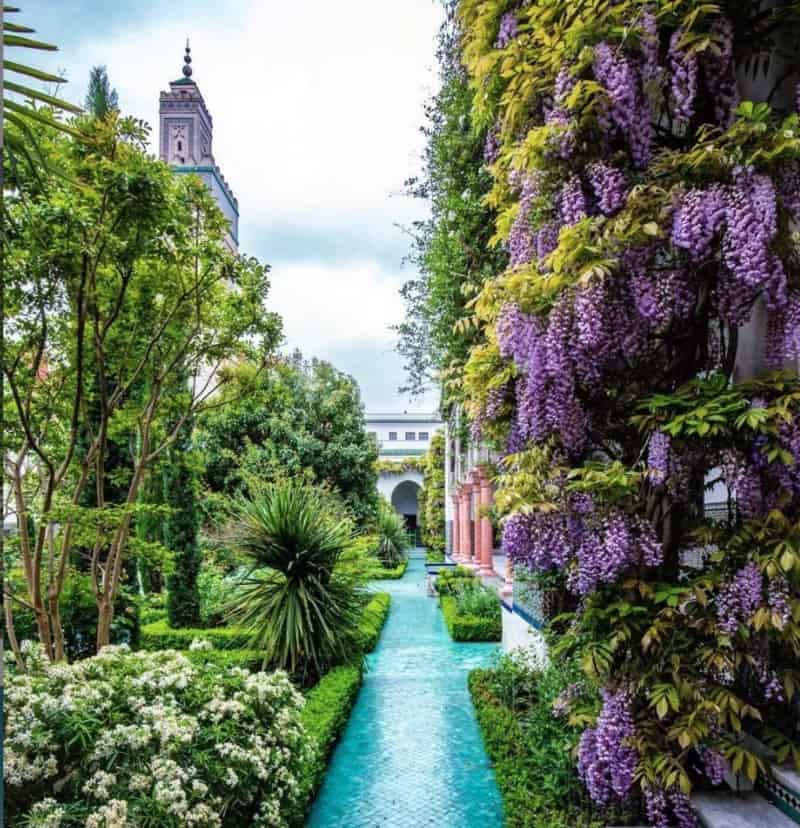 9: The Garden at the Grand Mosque: It’s totally beautiful — and even better, there are hammams on offer inside.

11: The bridge over the Canal Saint-Martin: It’s the ideal perch for figuring out where to drink on the canal’s edge.

12: Autumn color in the Tuileries: It’s pretty nice in the summer, too, but especially dramatic with the changing leaves.

13: The Seine at sunset: Pick your bridge, any bridge. Possibly the best: Sully.

15: La Défense skyline: This business district is easy to reach via Métro ligne 1, and absolutely gorgeous if you’re a fan of modern architecture. 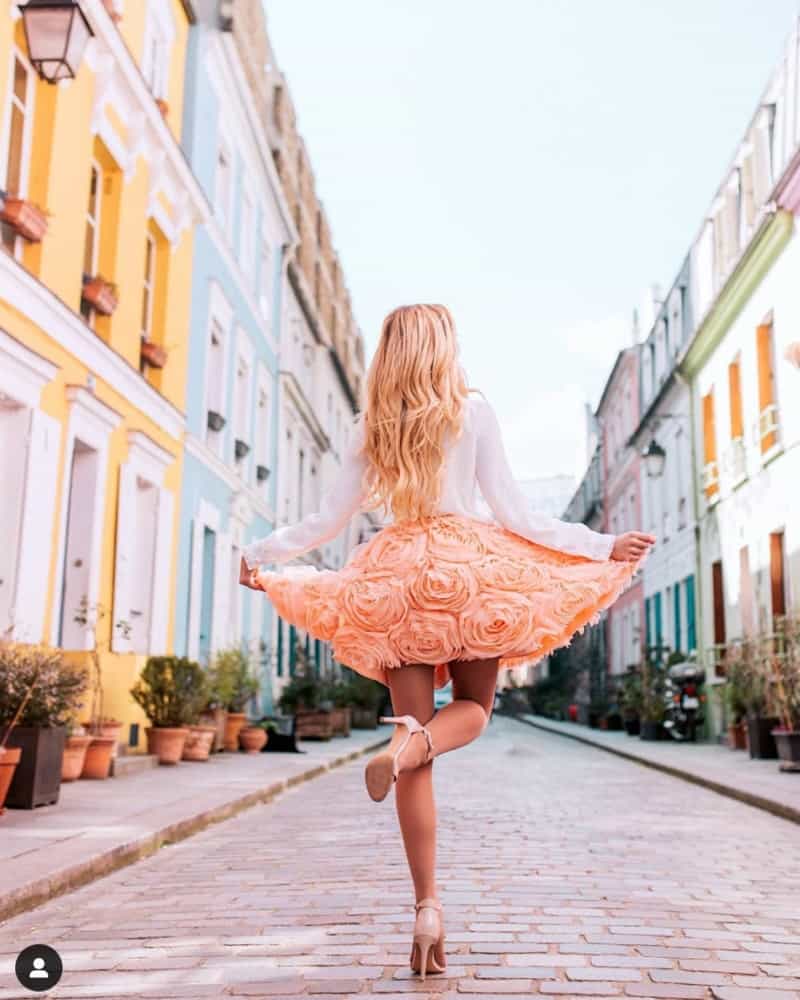 16: Rue Crémieux: It’s the most Instagrammed street in Paris — just watch out for the angry residents.

17: The Mona Lisa: It can be both a cliché and a masterpiece.

18: The view from Le Perchoir: Get there early if you want a seat.

19: A plate of macarons: Also a cliché, also a masterpiece. This is one instance where you really do get what you pay for — splurge if you can at Pierre Hermè.

20: The Louvre Pyramid: Also a cliché, also a masterpiece! Paris has a load of them.

21: The Palais Garnier: Ideally on the way to the opera.

23: Sparkly Eiffel Tower: Best for Instagram Stories. Look for it every hour on the hour from sunset to 1 a.m. 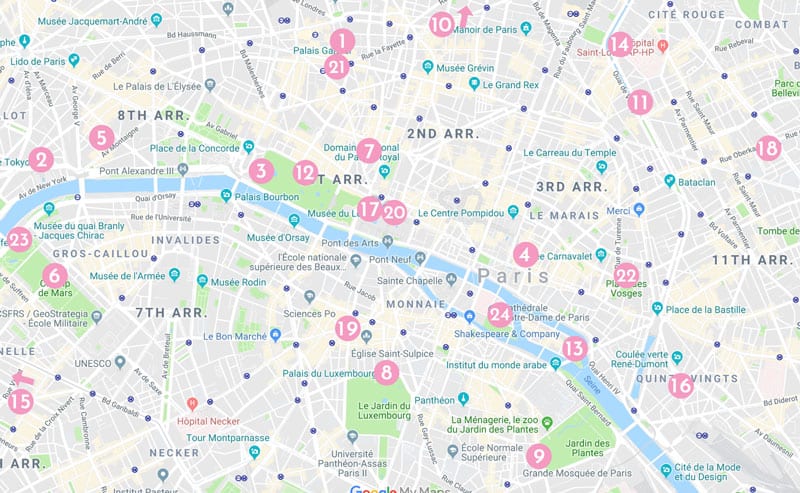