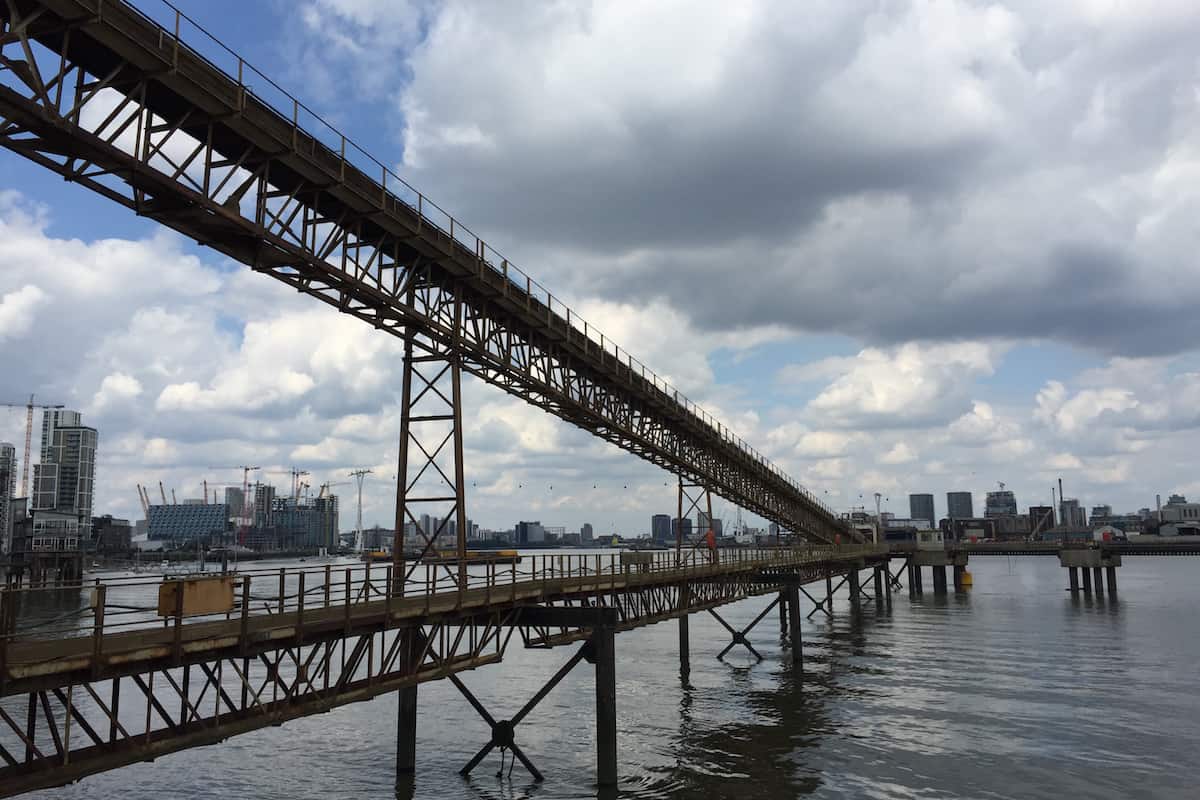 I am hiking the Thames Path, a path that follows the Thames for 180 miles, from the Thames Barrier in London to its source, near Cirencester.

Day One: Paris to Vauxhall

I do not remember the last time I was so excited to do something I couldn’t sleep the night before — which is difficult, because it means you are excited to do something having slept the hours of 2 to 5 the previous night, and you make questionable decisions like not bringing your sunglasses. Also, you are very tired, in that wiry, jittery way. But who cares: I am hiking as much as I can of the Thames Path before I need to return to France in five days: Sunday to Friday.

I have not been to England for three years, though I used to spend enough time in London to require a long-stay visitor’s visa. (It is a less permissive visa than the long-stay visitor’s visa I have in France. I am forever a visitor, but I stay for long times.) I have never had a conversation with a French immigration official: It’s always passport-stamp-au revoir bai!!! The last time I went to London, I found myself explaining the plot of the book I was writing to the British official: “But as soon as they return to Amsterdam, war breaks out….”

This time was no different: “You’re working the what?” the immigration official said to me.

This continued for a few more minutes.

“I’m walking the Thames Path,” I said. I was about to pull out my guide book and hold it to her window when she let me through.

In London, I took the train from St. Pancras to Charlton. From there, it was about a mile to the river. It was not super nice. Once you’re on the trail, though, it is better. It is marginally better. The Thames Barrier was quite cool, though not as big as I thought it would be. Instagram lies. Also, I acknowledge this may be the least photogenic image of the Thames Barrier ever taken. And so I set off! Now here is the amazing thing. It is amazing that people can do this. I woke up in France, took a train to London, and I had packed in my bag: two pairs of leggings, two t-shirts, one dress, one pair of jeans (which I was wearing — a terrible error), a pair of black Havaianas, as much clean underwear and as many clean socks as I could fit, three books (idiocy), a laptop, and assorted chargers. Also sunscreen, medicine, toothpaste, a toothbrush, deodorant, BB cream, mascara, lipstick, three weeks’ of contact lenses, and a granola bar. And I could walk anywhere. I could probably walk to China, if I wanted to. (I did not.) But that’s amazing.

Anyway: I had studied the Thames Path Distance Calculator and I had reserved my first night’s stay, for a tidy $60, at a two-star hotel in “Chelsea” (read: Vauxhall), about 15 miles away. So I set off. It took a few miles to sink in that this stretch of the Thames is very much a worksite, a place of industry — like real industry, not just digital marketing firms. Like this: This situation did not evolve as much as I thought it might have when I got close to, and then circled, the O2. Truth, this wasn’t the nicest morning of hiking I’d ever done. It was fascinating — to be so close to London City airport, to see all the working docks, to pass by a food truck selling jellied eels — but it was not lovely. This part of the trail also had a number of aggravating diversions, at one point past and around a driving range and at another forcing me onto the approach for the Blackwater Tunnel. This was not glamorous. At a certain point I became very concerned about where I would be eating lunch. Since it was Sunday, I had determined that I would under no circumstances miss Sunday roast. (My typical MO is too hike until it is too late to eat and go to bed angry.) Was 12:30 too early? It most certainly was not! I went to a riverside pub called the Cutty Sark, and it was delicious. Eh, it was OK. I was really hungry. And I love riverside pubs. If someone was like, you have to walk 184 miles but you can eat in all the riverside pubs you want, I would have been like Yes, thank you. I changed out of my jeans — I have no idea why I thought that was a good idea — and got back to the path.

Maybe I should have been more excited about passing the actual Cutty Sark (“the world’s only surviving tea clipper”). Not to be all “Rome is where we saw the yellow dog” but I’d been to Greenwich before and it was packed and there seemed to be 100,000 people watching clowns. I kept walking. And walking and walking, because the section that followed, through Deptford, was so poorly marked that I spent most of my time crafting elegantly nasty letters to various editors in chief of major newspapers about the poor nature of path indicators in Britain. There were a lot of developments for luxury condos. I felt I was witnessing an extreme level of wealth disparity, and it made me uncomfortable and sad. Rents in Paris are half, or less, what they would be in London. I am not a Communist, but I see some advantages in having strong pressure from the left advocating for the working class, at the expense of the global rich. Who does a country, and a city, serve? Wealthy expats? Poorer members of its own citizenry? What if those wealthy expats pay taxes that provide schools for that citizenry? What if, instead, they find enough loopholes to ensure they don’t? These are some of the things I was thinking as I got lost in Deptford and slowly made my way back to the river.

I took a break, saw a pig, and drank a Diet Coke at Surrey Docks City Farm, and it was tremendous. We should have a million of these in New York. Just farm after farm, all along the East River. Also: bees. As you can see, I was getting extremely loopy, and probably quite dehydrated, at this point. I kept walking. Walking walking walking. It was extremely boring, and then I made a turn, and saw Tower Bridge, and it was completely magical. Here it is, closer up: This next section — magic. I don’t know how it could be anything else. After Tower Bridge comes London Bridge, then Southwark, Blackfriars, and Waterloo. This was the first in a long series of pictures of bridges. (This is Southwark, with London Bridge in the background.) It was a beautiful Sunday afternoon in July, and though it was extremely, extremely crowded, I don’t know how you can do much better, in terms of a beautiful Sunday afternoon in July, than the South Bank. At some point, I stopped for dinner at a Pizza Express and ate like a wolf, like an actual wolf who was very hungry. At one point, the waitress, who I believe did not think I spoke English, asked if I wanted a knife, making that sawing action with her hands. I did not need a knife because I had basically already eaten the entire pizza.

I was at this point extremely tired. I was close enough to my hotel that I could take the Tube there and return to this spot in the morning, but I decided to press on — as mentioned earlier, I was extremely wired. Eventually I got to Vauxhall, was like CA SUFFIT and got an Uber so I would get to my hotel before 10 PM. (Cost: £6, which I felt very good about.)

Tell you the truth, I love a basic hotel as long as it’s safe, which this place seemed to be. And there was a TV, so I could watch Poldark. It was perfect.