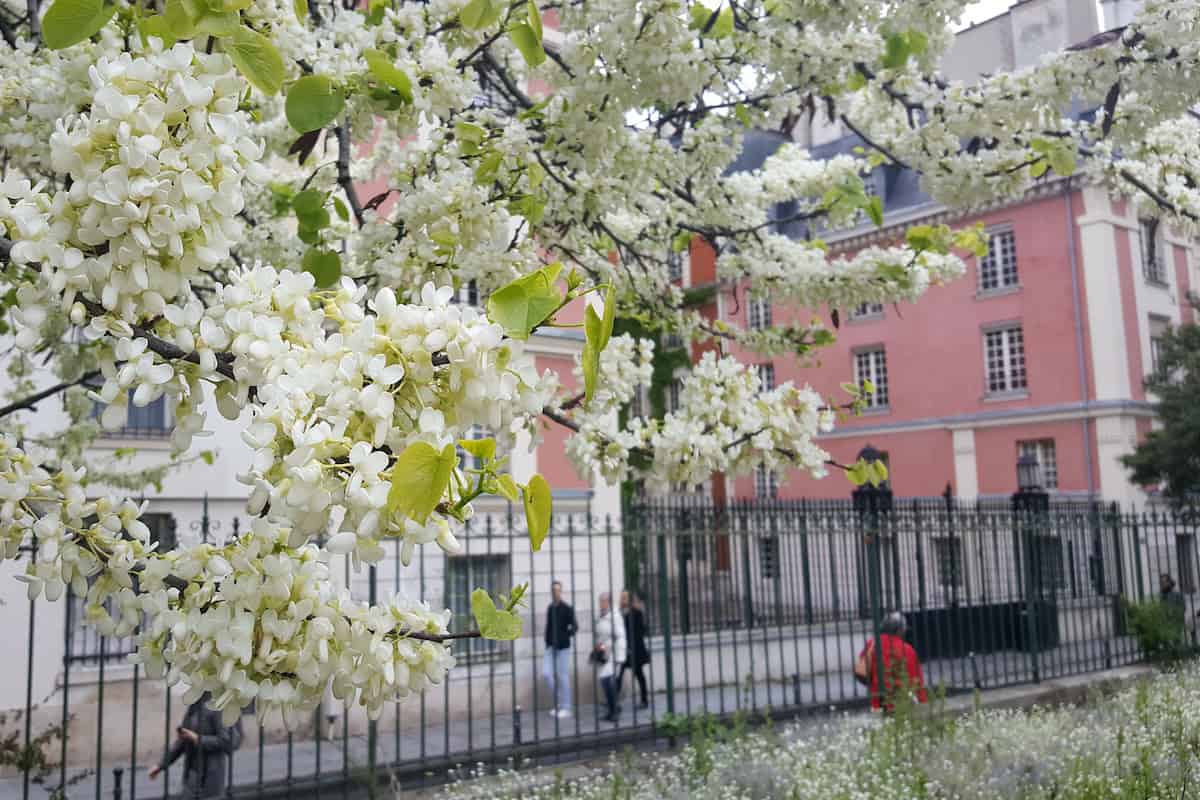 Choosing the best Paris arrondissement is the hardest thing you’ll do on a trip to France—an arrondissement, of course, being the Parisian equivalent of neighborhoods. There are 20, and they are as different as the Upper East Side and Bushwick. Picking the one that’s right for you is crucial.

It was for me when I first came here, and after more or less six years, I’ve almost always lived within a few blocks of my first address, at 32 rue Amelot in the 11th. That, in fact, is the cool thing: Once you pick your place—”your Paris”—it’ll be yours, and you’ll get to know the neighborhood, the shopkeepers, the café waiters, everything. Developing a relationship with your neighborhood is one of the best parts about spending time in Paris, so choose wisely.

I do think it’s interesting that the best Paris arrondissement to stay, as a tourist, is for me pretty much the same question as the best Paris arrondissement to actually live in—and I love the reason for that. I think it’s because the best Paris experience—outside of, like, seeing the Louvre—is just living in a Parisian way: eating, drinking, sleeping, preparing floral bouquets in your downtime. The best Parisian trip, in my opinion, is about the French lifestyle—so different from ours! In many ways, so much healthier, too. So if you happen to be reading this with an eye to moving here indefinitely, I think these rankings hold up, though I would scoot the 6th much farther down—it’s too expensive—and move the 15th way up, since it’s cheap but has good proximity to some cool things, like the Champs de Mars if you’re near the 7th and the flea market at Vanves if you’re at the other end.

Below, in my order of preference, and noting that this is of course a highly subjective ranking. 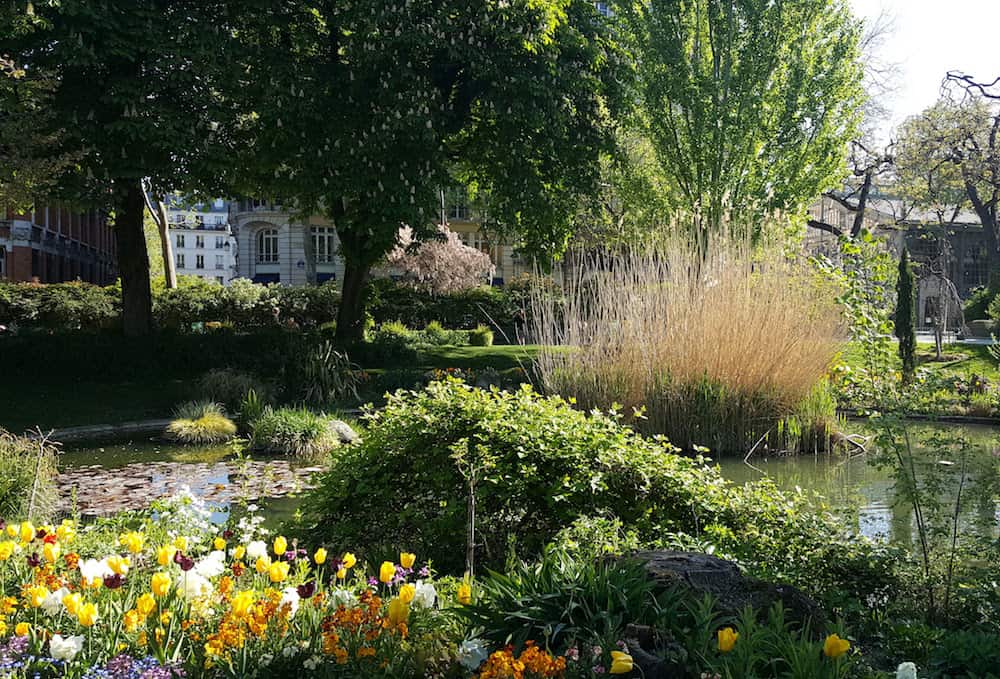 #1: 3rd
In short: The perfect mix of beautiful buildings, a central location, easy metro access, great shops and specialty food vendors—it doesn’t get better than the 3rd…as long as you don’t mind the crowds, the fashion, and the prices. Also there are a lot of Americans and other expats here, so if you’re looking for a totally French experience, look elsewhere.
New York City equivalent: SoHo + West Village
Amélie factor: 🇫🇷🇫🇷🇫🇷🇫🇷🇫🇷
Price: €€€€
Head here: Square du Temple (pictured)
The street we’d pick: Rue du Petit Thouars, away from rue du Temple
Top shop: Le Labo (this is an American brand, but the exclusive-to-Paris blend is divine) or Merci
Favorite thing to do in this arrondissement: Live
Favorite meal: Rotisserie chicken and potatoes from Franprix (we’re animals) or a mozzarella sandwich from Mmmozza

Staying for a while? Here’s how to rent an apartment in Paris.

#2: 4th
In short: A lot like the 3rd, but busier, with more tourists, and with more big-brand retail, especially along rue de Rivoli. If you can stay on the Ile St Louis, do it—it’s the perfect Paris experience, even if it basically closes down at night.
New York City equivalent: West Village + Upper West Side, with rue de Rivoli standing in for Broadway
Amélie factor: 🇫🇷🇫🇷🇫🇷 (add two flags on the island)
Price: €€€€
Head here: The tiny riverside park at the eastern end of Ile St Louis
The street we’d pick: Rue Saint Louis en l’Ile
Top shop: BHV, our top local department store
Favorite thing to do in this arrondissement: Wile away an afternoon at the river’s edge
Favorite meal: Salmon, green beans and fries at the St. Regis

This is a true story about customer service in the 4th and it involves mozzarella sticks.

#3: 11th
In short: A lot like the 3rd, but cooler, and younger. Toward Bastille it gets college-student rowdier (and less appealing).
New York City equivalent: Bushwick + Lower East Side + Upper East Side
Amélie factor: 🇫🇷🇫🇷
Price: €€€
Head here: The park between the two lanes of traffic along blvd Richard Lenoir (it’s nicer than it sounds)
The street we’d pick: Rue Amelot (our first address in Paris!)
Top shop: The extra-large Sessun on rue de Charonne
Favorite thing to do in this arrondissement: Walk up rue Oberkampf to the 20th
Favorite meal: Clown Bar (this place is for real)

#4: 10th
In short: The 10th is the “cool” Paris, though the whole city is cool (uh, except for like the 8th/16th, where all the rich people are, and even they’re still sort of cool). Watch the areas around the train stations, as they can be busy and occasionally un-magical.
New York City equivalent: Greenpoint + Grand Central
Amélie factor: Near the Canal, 🇫🇷🇫🇷🇫🇷🇫🇷
Price: €€-€€€
Head here: To the Canal St-Martin, on a nice night, with wine
Top shop: The Artazart bookstore
Favorite thing to do in this arrondissement: Shop along the canal
Favorite meal: Anything ending with a Paris-Brest at Cafe Philou

#5: 5th
In short: If you’re a Left Bank sort of person, this may be your spot. Like the 3rd, but with a scholarly vibe instead of a fashion-y one.
New York City equivalent: The Village right around NYU + Nolita
Amélie factor: 🇫🇷🇫🇷🇫🇷🇫🇷🇫🇷
Price: €€€€
Head here: The Jardin des plantes
The street we’d pick: Rue de Poissy—right near the river and so picturesque
Favorite thing to do in this arrondissement: Spend as much time as possible at the Jardin des plantes, then walk along the river to Shakespeare and Co. Or see a movie at one of the tiny independent theaters.
Favorite meal: Strawberries meringue at Café de la Nouvelle Mairie

#6: 6th
In short: Like the 5th, but for people who buy Balenciaga retail. For many, this would be the perfect Paris, though naysayers may find it a bit sterile, and closer to the river it can be busy with tourists.
New York City equivalent: Upper East Side + SoHo
Amélie factor: 🇫🇷🇫🇷🇫🇷🇫🇷🇫🇷
Price: €€€€€
Head here: Jardin de Luxembourg
The street we’d pick: Rue du Cherche-Midi
Favorite thing to do in this arrondissement: Loaf around the Luxembourg Garden, then head to the river’s bank with snacks.
Favorite meal: Sushi at Blueberry 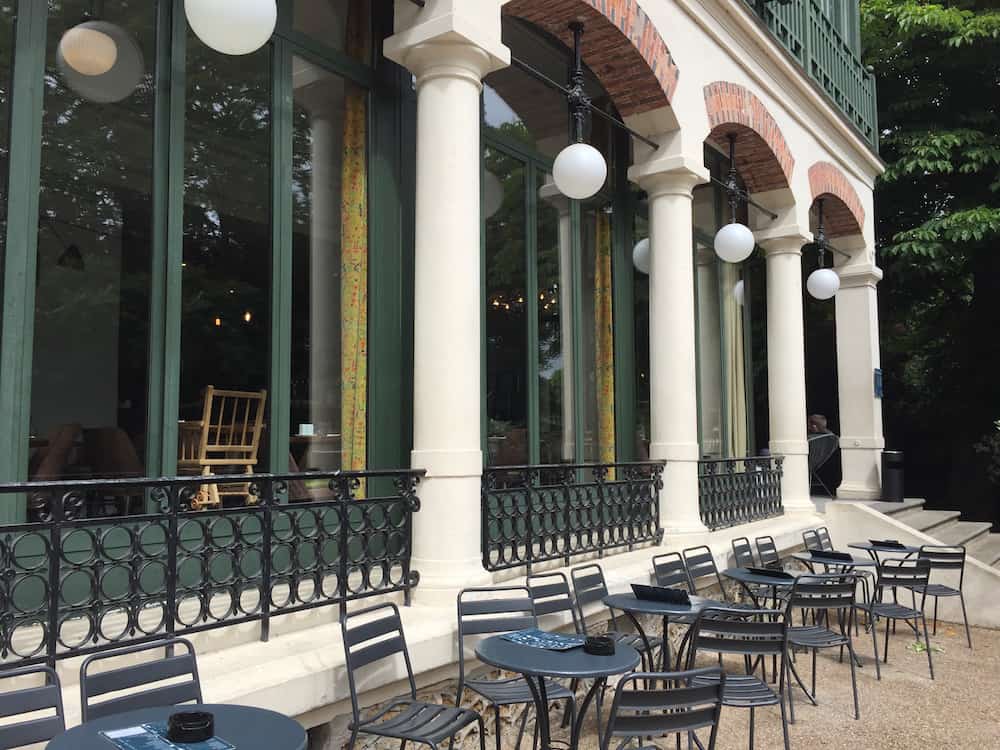 #8: 19th
In short: A lot of people complain about the 19th, but I like it so much I almost moved there.
New York City equivalent: Red Hook? I’m saying that mostly because it’s slightly out of the way and there’s a water influence. But the 19th is actually much easier to access than Red Hook.
Amélie factor: 🇫🇷🇫🇷
Price: €
Head here: The Parc des Buttes Chaumont (pictured) is lovely and not particularly huge.
The street we’d pick: Rue Botzaris, right next to the park
Favorite thing to do in this arrondissement: If the weather’s nice, head without question to the cafés on the bank of the Canal de l’Ourcq—you can even go swimming (sometimes).
Favorite meal: Popine, the pizza spot on blvd Menilmontant

#9: 18th
In short: Let’s just call this a land of extremes, from the unbelievably twee “Montmartre” bits near Abbesses to the part bordering the Periphérique. Some people think this is the best Paris arrondissement because it looks extremely adorable in Amelie—it actually is that, but there’s definitely more to this arrondissement than Montmartre. I actually also really like the Goutte d’Or area—it has a reputation for street crime, though I personally have never had a problem.
New York City equivalent: The West Village plus that part of Manhattan in the 170s that’s right next to the FDR? Not quite right but as close as I can get.
Amélie factor: 🇫🇷🇫🇷🇫🇷🇫🇷🇫🇷
Price: €-€€€€€
Head here: La Recyclerie, especially if they have a special event or you’re headed to the flea market at Clignancourt across the highway.
The street we’d pick: Rue Gabrielle (also lived here and can vouch for it entirely—just mind the stairs!). Or rue Caulaincourt, which is behind the hill of Montmartre and more relaxed.
Top shop: Spree, or, notably, the APC outlet on the other (eastern) side of the hill.
Favorite thing to do in this arrondissement: Shop along the rue des Abbesses
Favorite meal: La Boite aux Lettres—I ate here every day for six months.

#10: 9th
In short: I once did a story for NYLON on Parisian models and basically all of them said that their favorite places to go out were in the 9th. This is definitely the best Paris arrondissement if you are looking for bars with models.
New York City equivalent: Williamsburg but with beautiful buildings
Amélie factor: 🇫🇷🇫🇷🇫🇷
Price: €€€
Head here: “SoPi“—south of Pigalle, where the bars are
The street we’d pick: Something right off of rue des Martyrs, with its long, descending stretch of speciality food shops.
Favorite thing to do in this arrondissement: Walk down from Montmartre to the rest of the city, ending up at Grands Boulevards
Favorite meal: The boeuf bourguignon at Bouillon Pigalle—which is officially in the 18th but literally just across the street and definitely feels more Pigalle than Montmartre

#11: 12th
In short: Honest to God I love the 12th, for its proximity to the Promenade Plantée—the Parisian inspiration of the High Line—and its relaxed vibe. In my opinion, it’s the best Paris arrondissement for families, unless you’re also looking at the 15th, which can be a bit boring depending on exactly where. It’s a bit out of the mix, so prices are lower.
New York City equivalent: Upper West Side
Amélie factor: 🇫🇷🇫🇷🇫🇷🇫🇷
Price: €€
Head here: Square Armand Trousseau
The street we’d pick: Rue Charles Baudelaire, for its proximity to a main shopping street (rue du Faubourg St-Antoine) and the market at the place d’Aligré
Favorite thing to do in this arrondissement: Head to the place d’Aligre—not for the weekly market but the special, higher-end flea market on particular holidays
Favorite meal: Post-flea market oysters at the Baron Rouge (from September through the end of the season) 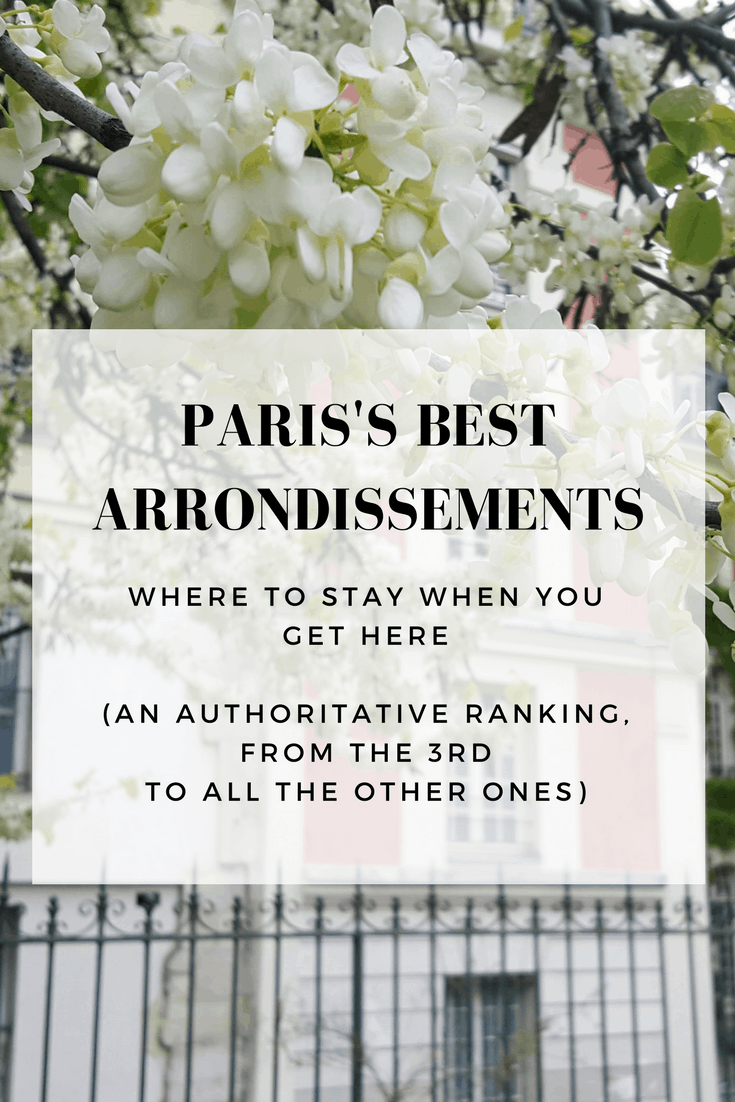