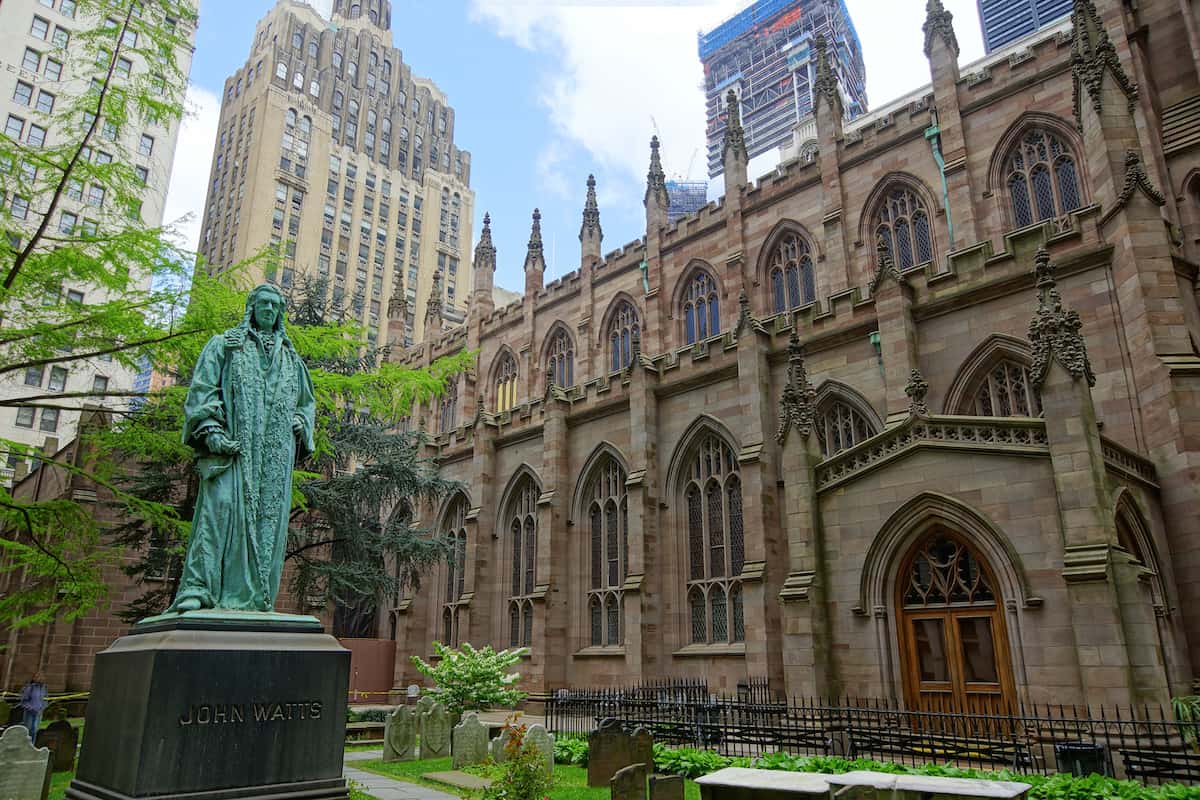 OK, so we’re at least ten months behind the whole Hamilton and Alexander Hamilton tour thing, but we’ve been away. Actually: Where have we been? Uh, France. I traveled the wide, wide world and came back to this. #hamiltonreferences

Because we just cannot get enough of Hamilton, and because listening to the cast recording ad infinitum is no substitute for investigating the man’s real-life hideouts, hideaways, dueling grounds and dinner spots, this is a nine-stop Alexander Hamilton tour of New York. Fact: This is Manhattan’s oldest house! It was built, in 1765, by Roger Morris — tragically, a Tory — on a 130-acre estate that went all the way from the Hudson River to the Harlem, which is mind-blowing. After Morris left, George Washington set up shop here during the Battle of Harlem Heights, only to be kick out himself after the British won Manhattan. Washington returned after the war, and here ate dinner with Hamilton (along with John Adams, Henry Knox and Thomas Jefferson) on July 10, 1790.

Almost unbelievable: A French immigrant named Stephen Jumel bought the house in 1910. His wife, Eliza, survived him — and went on to marry … Aaron Burr. Whom she promptly divorced, and was represented in those proceedings by … Alexander Hamilton’s son, Alexander. (Eliza’s story is amazing and well told here.) Alexander Hamilton never stepped foot in the Columbia University hall named for him: He attended King’s College, which underwent a hasty de-king-ifying after the war and with Hamilton’s help was rechristened and reopened. Fittingly, Hamilton Hall was the heart of the Columbia student protests in 1968, “calling attention to issues from local race relations to the Vietnam War.” There’s a statue of him in front of it.

When Hamilton was a student (1774-1776), the King’s College campus was located on Park Place, near City Hall Park. The main building, College Hall, seen below, was demolished in 1857. Its cornerstone was saved and installed in the mantle of a fireplace in Low Library. 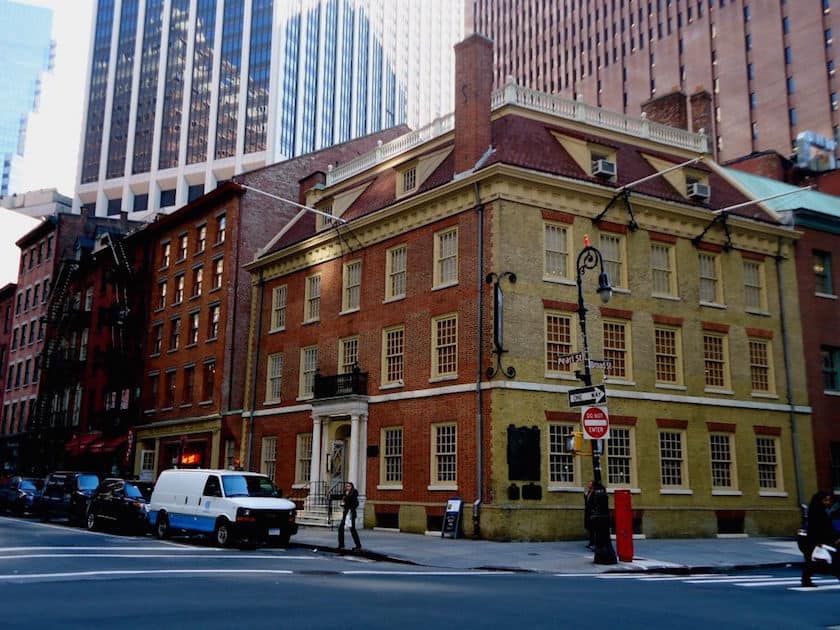 This one-time tavern (and now museum) at 54 Pearl Street was once a meeting house for revolutionary types — including Aaron Burr and Alexander Hamilton, who attended a dinner hosted by the Society of Cincinnati a week before their duel. Painter John Trumbull described the scene: “Burr, contrary to his wont, was silent, gloomy, sour ; while Hamilton entered with glee into all the gaiety of a convivial party, and even sang an old military song.  A few days only passed, when the wonder was solved by that unhappy event which deprived the United States of two of their most distinguished citizens.” The Museum of American Finance dedicates a room to our first Treasury Secretary, who “saved the new nation’s credit, established plans for funding our new country’s debt, created a national bank, and used the tax system to encourage economic development – all ideas considered ‘radical’ by most Americans of the time.” An exhibition shows oddball pieces like his Society of Cincinnati medal and a mourning ring containing a lock of his hair. 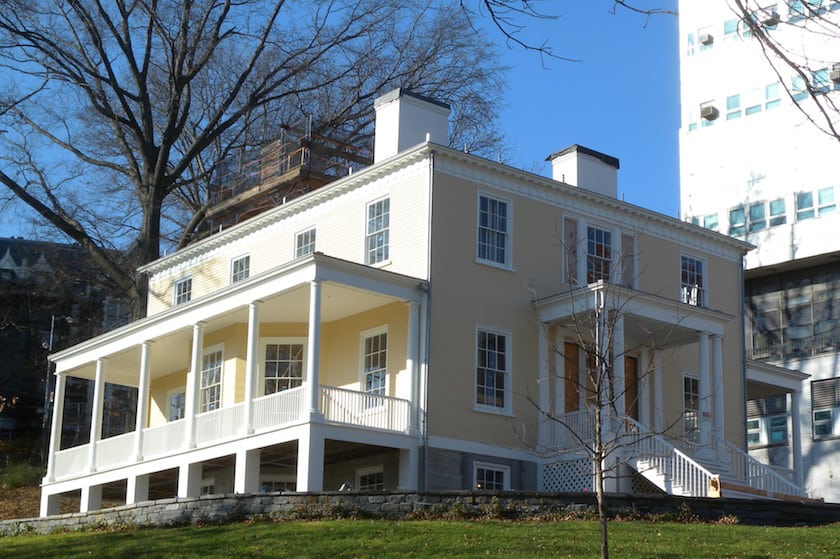 Now a national park site, Hamilton Grange, Hamilton’s home was built in 1802, only two years before Hamilton’s death. It was named for Hamilton’s father’s home in Scotland and designed by architect John McComb. Originally it sat on a 30-acre estate at approximately 143rd Street and Convent Avenue; it was moved in 2008 to its current, more pastoral location in St. Nicholas Park.

12 Garden Street doesn’t exist anymore. It was, though, once the site of Alexander Hamilton’s law office. Garden Street is so old it was originally named by the Dutch: Tuyn [Garden] Street. It’s now Exchange Place between Williams and Broadway. 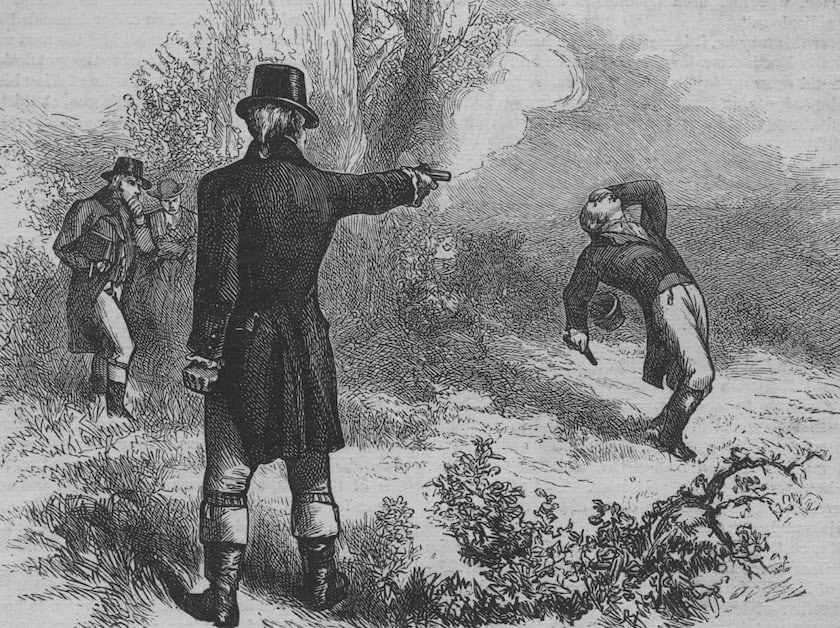 This requires a trip across the river to the former Weehawken Dueling Grounds in Weehawken, New Jersey, the site not only of Hamilton’s fatal 1804 duel with Aaron Burr but also Hamilton’s son’s equally fatal duel three years earlier. Did we mention the Rock of Death? There’s a Rock of Death, on which Hamilton supposedly rested (presumably before being whisked back across the river to Jane Street) after Burr shot him. The Rock, along with a bust of Hamilton and a plaque that bullet points some of the history have been moved from the site of the duel to Hamilton Street. A plaque at 82 Jane Street in Greenwich Village marks the spot where Alexander Hamilton lay mortally wounded following his duel with Burr — sort of. 82 Jane, in fact, marks neither the house nor the site where he died: The house at 82 Jane was only built in 1886. And the site was a few blocks away: “The house [belonging to his friend, banker William Bayard] was on the north side of Jane Street, close to and possibly in the path of present-day Horatio Street, which wasn’t mapped until 1817.” After he died at the Bayard house (not at 82 Jane), Hamilton’s body was moved to the home of his brother-in-law, John Church (Angelica’s husband) on Park Place downtown. His funeral procession ended at Trinity Church, where he was buried near his son, and where Eliza would be buried as well, a half-century later. And so: the conclusion of our Alexander Hamilton tour. Now: back to the soundtrack.